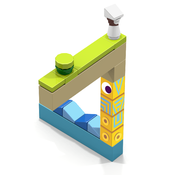 ‘An illusory adventure of impossible architecture and forgiveness’

Monument Valley is a popular interactive game, with secret paths, labyrinths, optical illusions and geometric mazes. Guide Ida, the silent princess, and her friend Totem, through a mysterious world of sacred monuments, temples, palaces and surreal landscapes. Unlock the puzzle of each level by outwitting the Crow People and exploring hidden passages in a search for forgiveness.

The game has sold millions of copies and won many awards including the IOS Game of the Year 2015, Best Mobile & Handheld Game 2015 and Apple Design Award 2014. The artistic design is reflective of the incredible drawings by M.C. Escher.

My Lego Ideas project is inspired by the Monument Valley game, and aims to capture the journey through a creative 3-D experience. This set includes four minimalist landscape themes that are modular and interactive; featuring rotating walkways, platforms, pillars, staircases, bridges and water wheels; along with three main characters, Ida, Totem and Crow. It is an original Lego design concept with visually attractive elements that are appealing and intriguing to a wide audience.

Please support my Monument Valley creation for the illusions to become reality.