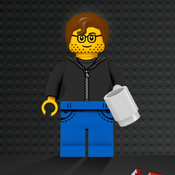 This model combines three things: an iconic landmark, a well-known, underutilized intellectual property, and TRAINS!  Paddington Station and the Underground train system in London are two iconic landmarks known around the world.  This model renders both the interior and exterior of this station.  As an added bonus, Paddington Bear can be spotted with his suitcase waiting for his train.

My first time to Europe I was amazed at the ease and scope of their public transportation system.  Being from America where cars and roads rule, I was blown away by the architectural marvels that are the great transportation hubs of London and Paris.  Now that I've traveled the world, I can honestly say Paddington Station has to be the most charming.  The sea of trains and schools of people flocking in and out make it a great place to people watch.

I love this particular set because of the little particulars: the interiors floor tile, the arches, the center clock, the lower level for the train, and the stack of newspapers in the entryways.  I also like how the exterior mirrors the Praed Street facade.  This set could certainly be bought in duplicates to make a larger Paddington if replicas are your thing, and because this set has both an interior and exterior, it could functionally sit in the center of your town for maximum play potential.