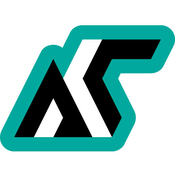 As your Companion Cube may have told you (and we remind you that the Companion Cube cannot speak. In the event that the Companion Cube does speak, the Enrichment Center urges you to disregard its advice. ), we've been developing a Portal Cuusoo Project for some time now. The two seem to mix well, Lego and Portal, the basic bricks and tiles can easily and perfectly (with a little brickmath) replicate the standard setting of Portal, the iconic Testing Chambers. But for the more complex assets of the game, notably GLaDOS, there is satisfying level of difficulty, but still an elegant and representative translation. Lego and Portal will mesh nicely, each enhancing the other, the whole greater than the sum of it's parts.

Now, let us flick forward in time a few months. A word of advice. If you notice yourself trying to warn you about supporting this project, do not make eye contact and ignore whatever you say. Lab boys tell me that'll wipe out time - entirely. Forward and backward. So do both of yourselves a favor and let that handsome devil go about his business.

We brainstormed for quite a while before crystallizing our various ideas and the multitudinous remarkable things about Portal, Portal 2 and related storyline into a few sets.

---
UPDATE - Wow, the project is over two thirds of the way there! Thank you so much for all of your support, and all of the bloggers, news agents and tweeters who have shared this project! But we still need your help to spread the word to more people! Tell your friends, your co-workers and your co-workers' daughters during Bring Your Daughter To Work Day!

As thanks for your phenominal support, Team Jigsaw has put together 10 high-res LEGO Portal Wallpapers, which we'll be releasing at each new milestone leading up to 10,000 supports!

Older wallpapers are at bottom of the page.

---
"I hope you brought something stronger than a portal gun this time. Otherwise, I'm afraid you're about to become the immediate past president of the Being Alive Club, haha." 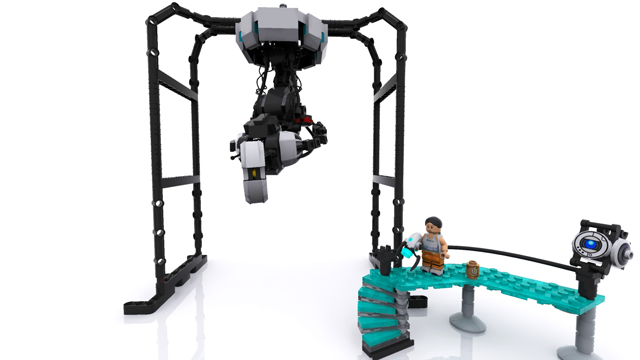 Primary Designer: Evan
Chell is trapped in the Aperture Science complex!
Lead through test after test by GLaDOS, Chell has finally found the psychotic robot's lair!
Will she succeed in destroying her nemesis? The final battle and the fate of Aperture lies in your hands!

Includes three minifigures, Chell, Wheatley, and the famous potato.
Features battle platform, portal gun, and GLaDOS
GLaDOS can swing a full 360 degrees and is able to rotate her head in all directions
Perform a core transfer with Wheatley and GLaDOS!
Battle platform is over 5" (15cm) long
GLaDOS is over 9" (22cm) wide, and over 12" (30cm) high
Parts count: 499+

"You know what my days used to be like? I just tested. Nobody murdered me, or put me in a potato, or fed me to birds. I had a pretty good life. And then you showed up. You dangerous, mute lunatic" 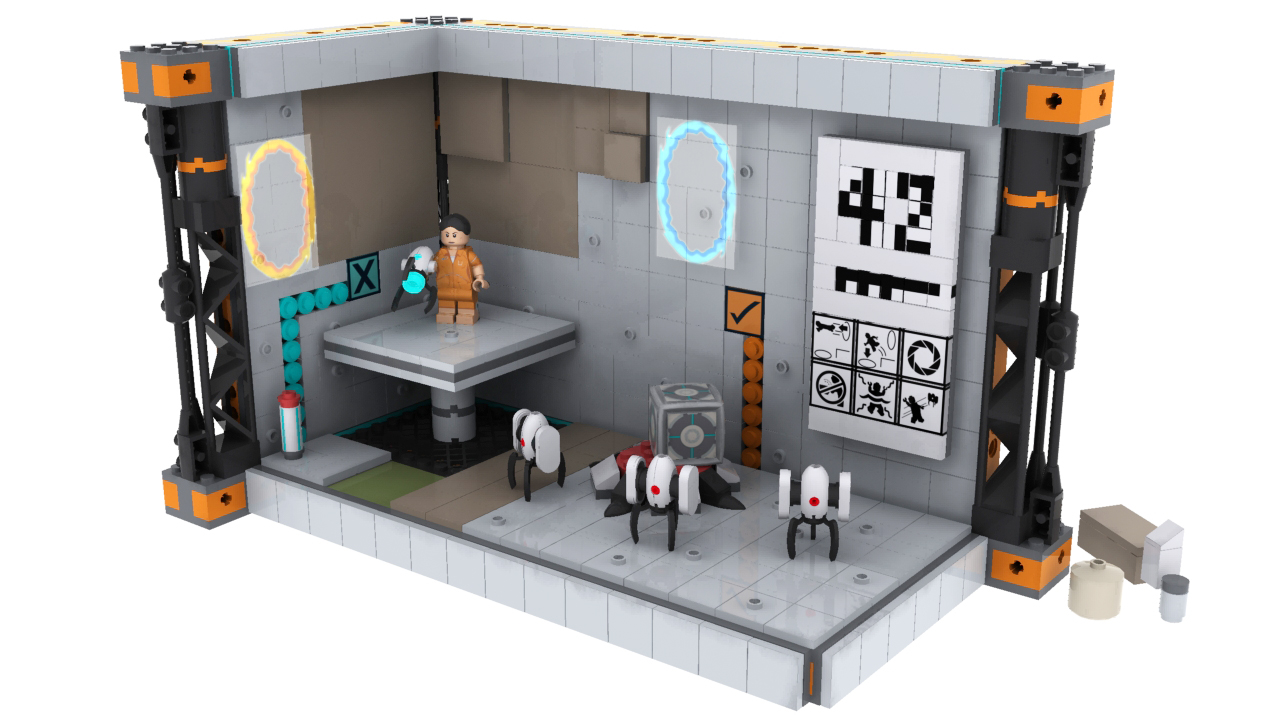 Primary Designer: Nick
Make your very own Test Chamber out of LEGO, in any way that you want! First build the modular frame to the dimensions you choose, and then fill the walls and floor with tiles, platforms, buttons and more! Finally, add accessories such as turrets, cubes, small buttons, signs, cameras and most importantly, test subjects!

Includes four minifigures, Chell and 3 Aperture Science Sentry Turrets.
Completely modular design allows you to redesign the chamber for different tests.
Solve button puzzles with the Weighted Storage Cube, or dodge the laser sights of an array of turrets!
Use the 4 different pattern tiles to create any 2 digit number for the level sign.
Discover a hidden Ratman den behind the testing chamber walls.
Standard Testing Chamber arrangement is over 10" (25cm) long, 5" (12cm) deep and 6" (15cm) tall!
Combine multiple Modular Testing Chamber sets and your own module designs for unlimited variations. The possibilities are endless!
Parts Count: ??? 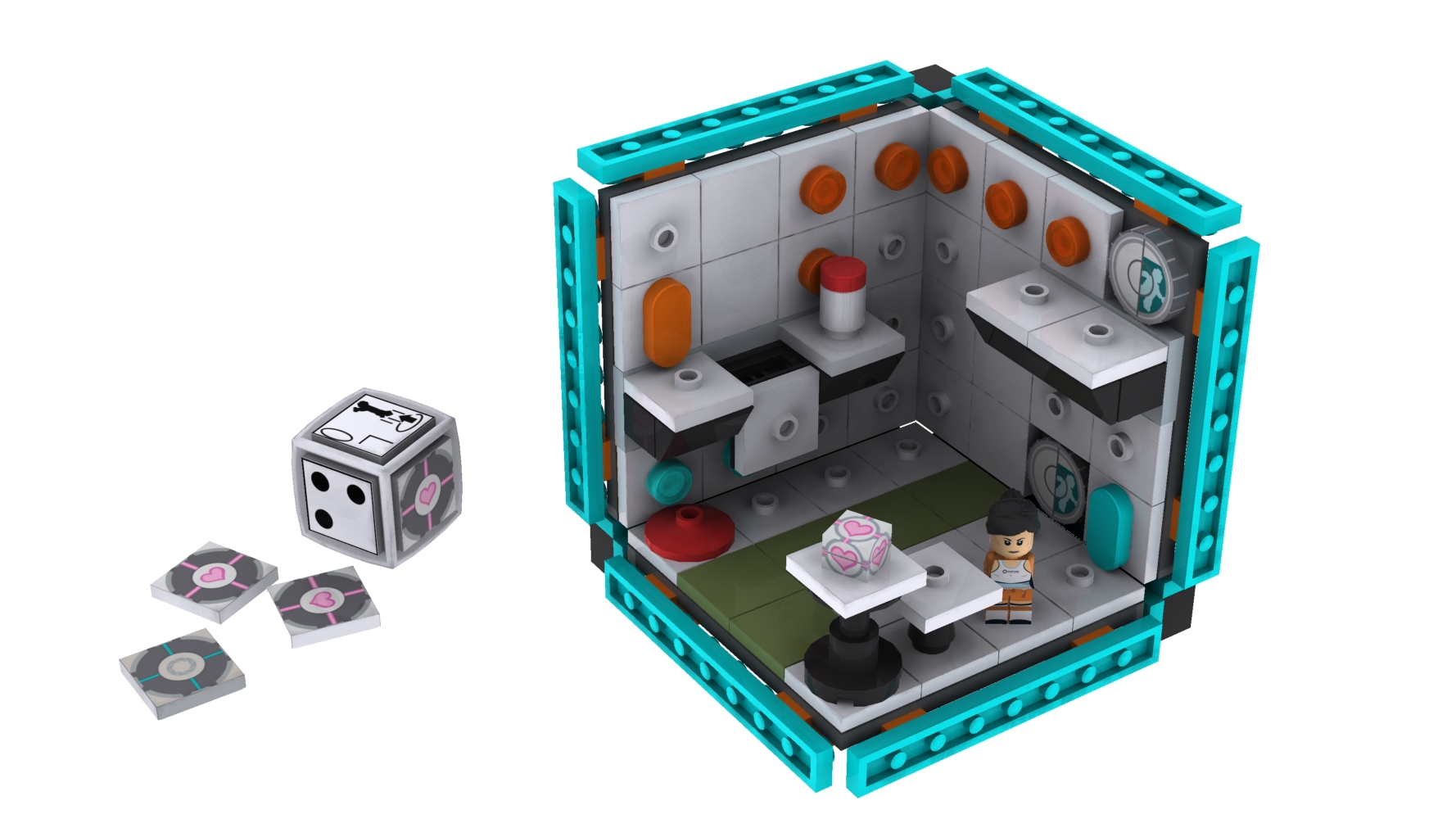 "Now you're thinking with Portals."

Like the Portal games, this is an enthralling battle of wits! Build baffling chambers using the instructions in the included Puzzle Booklet, and solve them with your Portal Device and innate cunning! If you beat all of the included chamber designs, get a friend to design a new one, or find additional fan made puzzles online. This is an indispensable 3D board game for any Portal fan! 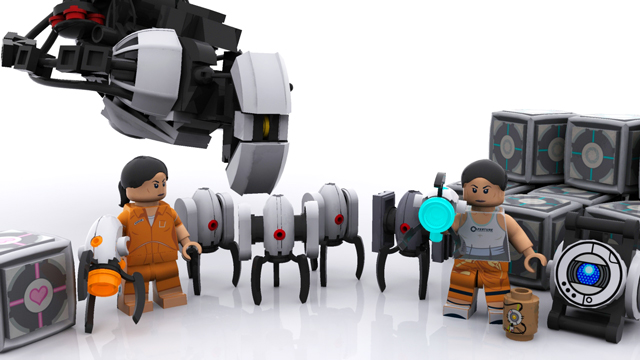 "Most test subjects do experience some, uh, cognitive deterioration after a few months in suspension."

Despite the popularity of Portal and its sequel, it is rumored that some people don't know exactly what this masterpiece of a game is. Put briefly, GLaDOS is the antagonist, and Chell is the portal-gun-ist! Get it? Er, anyway, here are a few of the minifigs that we've designed to be included in the sets. Post in the comments to suggest which other minifigs you'd like to see!

This project was put together by four Lego enthusiasts. This group (known as Team Jigsaw) was originally assembled in 2011 to compete in a massive month-long MOCing competition, testing our steel against the most tempered foils in the Lego building racket. In 2011 twenty-one teams brawled in the MocAthalon, and our team finished in Third place. In 2012 thirty-nine teams strove in Lego conflict, and our team came in Second place. Suffice to say we can plot a line graph and are optimistic for 2013.

These long, successful competitions tend to form a bond, and our team has stayed in touch since the last competition, having fun, honing our story-telling abilities in creative writing scrimmages, building, painting and making total fools of ourselves.

Nick (Brickthing): A New Zealander Bionicle enthusiast, currently attending University in pursuit of an engineering degree. In his spare time he paints, plots and pwns.

John (Fivey): An east coast American and the founder of Team Jigsaw, who stays up until 5 AM when collaborating on mad projects (such as this one). With a ken for organizing and a lust for creative prowess, he orchestrates and participates in many wild Lego contests.

Micah (Kakaru): Odds are you have seen an MOC or two built by his hands. An avid Lego fan, builder, writer, and reporter, he has creative abilities that are sometimes virtually indistinguishable from madness.

Evan (Ehl-jay): A denizen of Hawaii, the creator of a wildly popular Portal vignette, and a significant presence in the Lego Flickr community, he has been MOCing for years at a ridiculous pace.

Why are we doing this? For Science!

Please show your support and share the project with your friends! All supporters will get cake*!

*Aperture Science is required to remind you that all willing supporters must first be baked in order to qualify for cake.

For more pictures of the entire project, click here!