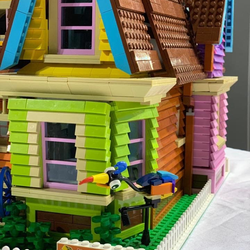 Since UP is one of my girlfriend (and I of course) favorite Disney Pixar Film, we want to share with you my personal MOC of the so beloved "Mr. and Mrs. Fredricksen House".

After the first project had expired, we made some modifications to the second version:

The external walls are still made with a lot of tiles in order to re-create the "angled wood effect" of the original house, and the 1st floor can be enlightened with LEGO led in order to better look at the furniture details. So, after the latest update, we are now happy to introduce you...
"THE UP HOUSE 2999.2"