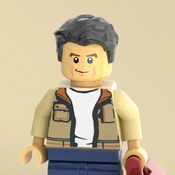 By JulienG12
76 comments
Interstellar is one of the most impressive movie of the 2010s. The Christopher Nolan’s masterpiece is about exploration, science, space, time, family, environment and love.
As in the movie, this set treats the concept of space-time:
The farmhouse is composed of 3 rooms:
9 minifigures:
To conclude, this set represents all the Interstellar’s universe. There are the most possible elements and references while being coherent.
It would be a great LEGO set because it is playable, can be exposed, has a big secret feature and makes you relive this wonderful story.
The whole model has 2932 parts.