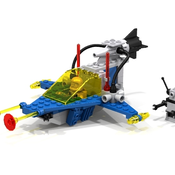 This is my modern interpretation of perhaps the most iconic spaceship Lego has ever created, the LL 928 Galaxy Explorer (or Space Cruiser and Moonbase depending on where you live). And the LL 929 is Benny's spaceship! The idea is that the LL 930 was built after Lord Business was defeated and space exploration could resume as normal. No more heavy weapons, just a few faser canons just in case Blacktron made a comeback ;-) .

The set is built with 770 pieces, including the rover and the base, and retains all of the original colors, blue, grey and transparent yellow. 4 minifigs, 2 white and 2 red, complete the set.

I took the dual canopy look from my LL 925 project and supersized it at first but it just did not look right so I scraped it and started from scratch retaining only the ideas that worked. The finished ship has the twin cockpits but they're much bigger. The loading bay contains a science station and room to hold the rover.

Since I hate wasted space this ship has a hidden compartment and access to a service space in the top cockpit! There's a lot of engine/technical stuff going on in the belly of the ship, it's not all accessible but it gives an extra dimension to the ship knowing it's there. The small base has a rotating main satellite dish (something that was sorely missed on the original one!) and a smaller one on the side. It has a small storage compartment and retractable stairs.

This being an LL type ship it had to have some key elements like the "bumblebee" striping. And while the purists may say that the orientation of the striping is wrong I just could not make it look good enough (believe me, I've tried!).

That's it for my LL 930 Galaxy Explorer. I hope you like my project and vote it to 10.000 supporters so that we may all enjoy new "classic" space adventures!

Thanks in advance for you support!