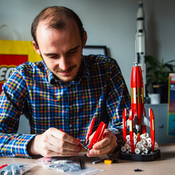 🔥 "Would my Lord like me to light a fire for him?"
🏰 Welcome to this mansion built in the Renaissance style! It is inspired by this emblematic era that transformed Europe and, more specifically, by the architecture of the Loire Valley castles in France.
🎨 The French Renaissance is an artistic and cultural movement that took place in France between the middle of the 15th century and the beginning of the 17th century. A phase of the modern era, the Renaissance appeared in France after the movement began in Italy and spread to other European countries.
🌍 As in Italy, its characteristics are the thirst for life, the confidence in Man, the appetite for knowledge, the spirit of free examination. This movement challenged the mentalities of the Middle Ages and sought new forms of life and civilization. Indeed, the possibilities of disseminating information through printing, and the discovery of a new world beyond the Atlantic, profoundly modified the world view of the men of that time.
👑 The French Renaissance was the time of painters and sculptors who were employed by kings, the most emblematic of whom were François I and Henri II. It was also the time of Leonardo da Vinci!
-
🧱 This Mansion is built with warm colors: light color of the limestone (tan) and orange colors of the brick. It is built on four levels:
1️⃣ A ground floor including the entrance hall, the living room and the dining room. These last two rooms each have their own fireplace.
2️⃣ The second floor has a bedroom and a bathroom.
3️⃣ The third and 4️⃣ fourth floors are both sheltered under the roof.
✅ Although it is open on the back, I allowed a better accessibility to the decor thanks to the removability of the different levels of the construction.
🔎 This allows to discover the details of the construction, such as the fireplaces, the chandelier, the layout of the bedroom with its four-poster bed, the layout of the bathroom or the library.
💎 The facade is very rich in decorations, while at the same time there is a certain sobriety thanks to the very straight lines imposed by the architectural style of the time.
👸 The set includes six minifigures to help you tell stories worthy of Downtown Abbey, Bridgerton, Pride and Prejudice and a thousand other romantic adventures. These stories will be enlivened by the presence of a dog and a cat.
-
☀️ I am delighted to present this set which is full of history and which lends itself to telling new stories. It is, from my point of view, as much an exhibit, due to the architectural beauty of these buildings, as it is a game set, thanks to the characters and the potential for playability, with this open back and the removability of the floors.