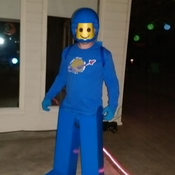 This is my LEGO interpretation of Leonardo da Vinci's Ornithopter, otherwise known as his flying machine. Leonardo is regarded as a true renaissance man, his paintings including the Mona Lisa and The Last Supper are world renowned even some 500 years after he lived. His areas of interest were many and varied, including architecture, sculpture, engineering, anatomy, literature, astronomy, and cartography. Hence the term renaissance man, and that's only a partial list. It may or may not be the first Ornithopter designed but is certainly one of the most iconic and remembered throughout history. The debate of whether or not Leonardo actually built and attempted flying it is ongoing, with no definitive record one way or the other to let the matter rest, though I personally doubt that he did as I believe he would have joyously recorded that success somewhere in a notebook and a disastrously botched attempt would have been reported by his next of kin.

As an avid LEGO builder and aviation/history enthusiast I really enjoyed the study and design challenges involved in getting this build "off the ground". From brushing up on some 15th and 16th century history to a detailed study of Leonardo's sketches and even a small scale model of the Ornithopter that I was able to base the proportions on I've thoroughly enjoyed it, and I hope you enjoy the images of my finished model. The model itself rests on a stand which has a hand crank that is used to not only flap the wings but to turn a small orrery in the upper portion of the stand. The small planetary orrery is time appropriate,to predate the heliocentric model of the solar system, featuring the Sun revolving around the Earth. I've used several fence elements in the construction of the base so that one can observe the inner workings in motion when the crank is turned. You will see that there are several gears on the outside as well, they aren't just to make it look cool, they all serve a purpose in the overall system. The gears on the right side run the rotation of the Sun, while the ones on the left spin the Earth, so not only does the orrery turn but it has separate speeds for each sphere! A somewhat hidden detail is the night sky including the Big Dipper constellation tucked in above the Earth. On the front is the wing mechanism that is run by a gear raising and lowering the wing strut mount within a vertical track. On top is the Ornithopter itself, as mentioned above I was able to use a small scale model for reference, which I think came out pretty well. It is a skeletal model, having no wing coverings, to show the frame construction.

I think this would be a great set, not only for display but as a functional model that is fun to use and fairly mesmerizing to watch, that reminds us of a bygone era in history and one of the most famous men of the renaissance.