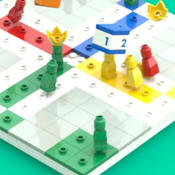 By TookYT
14 comments
a simple set based on the good old game Ludo, with some extra bricks too build something in the middle, maybe a tower, or a rocket
how to play:
In this game, each player has four pawns that must complete a round around the board to safely reach one of the end circles. Once there, a pawn cannot be moved. If all of the pawns succeed in this, the game is won.
Each player has pawns of its own color, its own starting point, and its own end circles that other pawns are not allowed to enter. The players take turns rolling a die and must move one of their pawns clockwise the number of circles indicated by the roll. If one has touched a pawn, the choice is final and this pawn must be moved. When a pawn lands on a circle where another pawn is already standing, it is discarded (captured). A discarded pawn must be reintroduced into play and complete its round from the beginning.
When one reaches the row with the four end circles of one's own color, one may enter this row by counting depending on the number of eyes thrown. It is not mandatory to roll 1 first to enter the row of end circles. One sets the number of steps that have been thrown with the dice; when the end point of the row of end circles is reached, the pawn cannot be moved any further.
When a six is rolled, the player may, if available, bring a new pawn into play. Then he throws again, and in doing so he is obliged to play with the pawn that has just come into play, at the risk of discarding another pawn of his own. A player must also roll six in order to start moving, as only then may a pawn be placed on the board. As a result, the player may not be able to move for a number of turns. This can also happen if all his pawns have been discarded and he has to start all over again.
If a six is rolled and no new pawns are available, you can play with any pawn. Even then the player gets an extra turn and a random pawn is played.