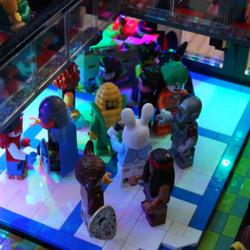 Thanks to Nostrajanus, I was motivated to build this up as a set, here is the result with added internal lighting.

1 Place Ville Marie is one of the premier office towers in downtown Montreal, part of an office and underground shopping complex know as Montreals Underground City, with indoor access to over 1600 businesses, several subway stations and the Central Station rail terminal.
The building has 47 floors with about 1 million square feet of office space, and features 32 elevators.  Underground parking has room for 900 vehicles.  At the time of construction it was the tallest skyscraper in the Commonwealth at 617ft.  The tower was erected between 1958-1962 and built over underground railroad tracks supported by pillars elevating the main building about 30ft above the ground.
The rooftop lookout opened in 2016 for visitors featuring multi-floor attractions such as telescopes and exhibition gallery.  The 4 rotating rooftop spotlights can be seen as far as 30 miles away.