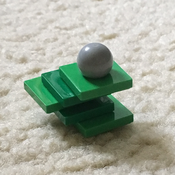 By Mjolnir40
27 comments
Winter, Spring, Summer, Fall; four seasons, in a never-ending cycle.
This model is pretty self-explanatory: The four seasons portrayed in Lego, all in the same scene of a tree next to a river. Apparently, this is a magical tree where time is suspended and the four seasons exist all at once in harmony. There is a river that flows from winter into spring, and the leaves are at once falling and growing.
I definitely don’t claim to be the first person to have done something like this, and I don’t doubt that there are similar models out there. However, I think I have to say that my inspiration for this model, whether consciously or subconsciously, must have been from a book by Rick Riordan called The Lost Hero. At one point in the book, the heroes travel to the palace of Aeolus, lord of the winds, on an island floating above a mountain. There they find a park divided into four sections, one for each of the four seasons, representing the four winds.
This model can be taken apart and put back together using technic pins, or, by attaching hinge plates, you can rearrange it in several different ways. Or you can just have the four sections separate, or change the order of the seasons if you want. When putting it together with technic pins, be sure to attach winter to spring, and summer to fall, before putting the two halves together (or fall/winter and spring/summer). Each quadrant can stand alone as its own scene representing that season, or they can be combined for the larger scene.
This is a very simple idea, but I think it would really work as a LEGO set, due to it being about the right size, as well as its universality. If you would like to see this become an official LEGO set, be sure to add your support, and feel free to check out some of my other projects as well.