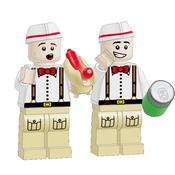 Hi! I hope you like this build! This is my first Lego Ideas project and actually it is the first time trying to build Lego digitally, so I might have some minor errors and my renders might no be the best, so I apologize. When I was a kid I always wanted a lego zoo, so when I discovered Lego Ideas I started building it. Having a Lego zoo would not only be cool, but it could be also educative, since kids could learn about the different habitats, food, some interesting facts and you could also display different habitats and animals in your bedroom. I wanted this MOC to be different from all the other zoos in the Lego Ideas platform, so I decided to use 16x16 plates to create the zoo parts, this makes all the sections of the zoo similar and since they are not joined you can arrange your zoo the way you want!

The Food and Drink Stands = 237 Pieces (Including both minifigures)

A zoo is not complete without food and drink stands. I wanted to create son unique and eye catching stands, I have to say I was inspired by Zoo Tycoon a game I loved to play when I was a kid. The food stand is also inspired by the Dinosaur stand which appears in the set “75934”, so I modified to be a Lion.

The Penguins Enclosure = 129 Pieces (Including 3 Penguins)

Penguins are one of my favorite animals and they are also one of my favorite lego animals. This enclosure includes a water part, snow and some rocks. Did you know that penguins lose all their feathers at once? This is called the catastrophic molt and they cannot swim until their feathers are replaced. It includes a door so that you (the Zookeeper) can enter to feed the penguins and clean their habitat.

The crocodiles Enclosure = 370 Pieces (Including 2 Crocodiles)

This enclosure includes a cave where a crocodile can enter to rest, a water area for them to chill and swim, finally it has a lot of vegetation and rocks. This enclosure has a panoramic view thanks to the transparent panels used in the build, it also has an area with a bench and a tree so that visitors can rest and watch these incredible animals. If you like to play as a zoo keeper this has some cool play features to make your playing experience better. I built a feeding door where you can put the food so that the Zookeeper can feed the crocodiles without having to enter the enclosure, but it also includes a heavy door, so you can enter to clean the enclosure, just be careful! Did you know crocodiles coexisted with dinosaurs around 240 million years ago? They are kind of living dinosaurs!

Monkeyland is a great way of watching the monkeys climbing all around, it includes a water area, which includes a platform where they can rest, a big tree with sticks  where they can hang and rock playing area. The best part about this enclosure is that the visitors can see the monkeys from the bridge or if they are afraid of heights from below. Did you know monkeys and apes are in fact really intelligent? Capuchin monkeys actually use tools in the wild, as a kid, I even watched in my hometown zoo an ape waving branches and leaves towards a person who had fruit, as if trying to exchange objects.

The Zoo entrance was a real challenge for me, but I think it ended up pretty well. The entrance is quite unique it has 2 plant sculptures on the left side a lion, which I took from the set 10709 and changed the color to a scale of greens and a rhino in the right side, which I created from zero. Visitors can buy tickets in the middle so that they can access through the arches. I also included some rockwork and two benches.

This zoo also includes a mini aquarium, where visitors will be able to watch part of the sea life, this aquarium is a perfect fit for small fish, shells, starfishes and it even has live coral. As much as I would like to include a shark or a ray I was not able, since they needed a bigger tank and our zoo was almost full. Did you know that the majority of life on Earth is aquatic? Yeah, I know this sounds crazy, but 94 percent of Earth's living species are aquatic.

The situation of the earth poles is alarming, so it is important to teach kids to help save the environment. Sadly, right now Polar Bears do better in a good zoo that in the poles, so let's do something to help this awesome animal. Did you know polar bears have actually black skin? Yes their skin is black, but their fur appears white.

Well, thanks for reading this, do not forget to support this project, the things I would like to add to this set is a zookeeper minifigure, some mixture of foods to feed the animals, etc.

Arrange your zoo however you want!