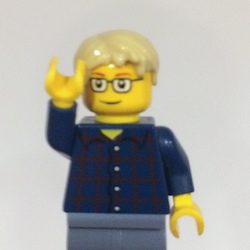 Look! A lovable little Lego lizard! Lots of letter L's. Anyways, this guy is about as mobile as you can get! Both his head and middle section connect using a ball joint, maximizing his range of movement. His tail moves freely from side to side in either direction and can be raised and lowered. Each one of the legs can be moved in any direction and his hands fold in and out as well. Did I mention he can also hold accessories in his hands like a minifigure can? This lizard sure will be fun to play with - maybe even more than a real one!

Unfortunately I do not have any more pictures of him, I built it a while ago. I might remake him later with more pictures.