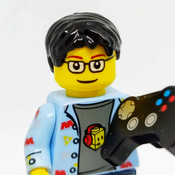 ■About the work
I created "NiGHTS","ChristmasNiGHTS", "Reala", "NIGHTOPIAN", and "SEEDS TOWER" from the Sega Saturn title "Nights into Dreams" &"ChristmasNiGHTS" released in 1996.
Originally released for the Sega Saturn, the game has also been ported to the Playstation, XBOX, and PC, where it can still be enjoyed today.
The legendary action game "Nights into Dreams"& "ChristmasNiGHTS"created by Sega's "Sonic Team" is a game that I played obsessively as a child. is one of the video games that I played with great enthusiasm when I was a child.
Why don't you fly with "NiGHTS" too?
■About the composition
Number of parts: 2319 pieces
■Character
" NiGHTS"
" ChristmasNiGHTS"
"Reala"
The joints are ball-jointed and can be posed as desired.
" NIGHTOPIAN"
Arms can be moved back and forth and legs can be moved left and right.
■Buildings
"SEEDS TOWER"
By attaching the stand, the aerial battle between "NiGHTS" and "Reala" can be recreated.
■Optional parts
Display stands, etc.
I myself would like to see these items commercialized, and look forward to your support.