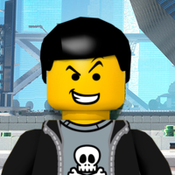 This is a large scale TARDIS from the BBC science fiction television show "Doctor Who".

What is a TARDIS?

TARDIS stands for Time And Relative Dimension In Space". It is the vehicle used by the main character of the series known as "The Doctor". The Doctor is of an alien race known as the Time Lords. A TARDIS allows Time Lords to travel through time and space.

By design, a TARDIS  has a "chameleon circuit" which allows the TARDIS to change its outer appearance to blend in with its surroundings to avoid suspicion. The Doctor's TARDIS has a broken chameleon circuit which results in his TARDIS being stuck in the shape of a 1960's era British police box.

To create the white letting of the "POLICE PUBLIC CALL BOX" signs near the top of the TARDIS, I used a Brother P-Touch label maker.

For the letting on the white telephone door panel, I printed a decal with a transparent background.

Ideally these wold be custom printed bricks in the actual Lego version, but stickers would work as well.

In the television show, the color of the windows varies greatly. They've never been transparent as allowing you to see through to the inside of the TARDIS prop and to see through to the actors and other windows would kill the illusion that the prop is a time machine. In the original series of the 60's, 70's and 80's, the window panes usually looked like very dirty gray windows. So dirty you couldn't see through them. In the new series of the 2000's, the windows have gone from all white to a black and white pattern.

I decided to go with the latest look having the top 3 panes and middle lower pane being blacked out and the lower outside panes being a translucent white.

To create this look for my model, I cut out bits of parchment paper for the translucent white panes and put that paper in the window frames before popping in the Lego glass panes. The Lego glass holds the paper in very nicely. For the black panes, I covered the same parchment paper bits with a translucent black film and inserted them into the window panes that same way.

For an actual Lego kit, I would love to see these panes done by making the appropriately colored glass panes. Or, appropriately sized and colored bits of paper or vinyl could be provided and used behind the clear class panes as I have done.

These glass panes could be translucent like my model or simply solid white and black. I made mine translucent as I wanted the ability to be able to insert a light inside the model which causes the windows to light up, mimicking how it is sometimes shown on the television show.

The background space image of the TARDIS in space image is provided courtesy NASA/JPL-Caltech.