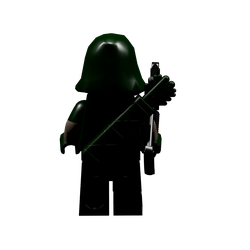 You Have Failed This LEGO City!

Protect Star City from its criminal underbelly with your very own team of vigilantes in this special LEGO collection featuring all of the iconic set elements of the “Arrow Cave” as seen in the hit CW show Arrow.  Assemble Team Arrow as you enter the lair via the secret elevator and relive all of your favourite scenes with the various components included.  Help Oliver Queen don his trademark hood and become his heroic alter-ego, The Green Arrow!  Then ride into action with Arrow and Speedy’s custom motorcycles to stop whatever sinister plans Malcolm Merlyn is plotting.  Whether it be briefing for a new mission in The Overwatch, analysing evidence, or undergoing an intensive training routine, you’ll find everything you need in this show-accurate model.