Final Update - Thanks you for all your support

A year ago I posted a list of people who have built this NASA Crawler-Transporter. (in alphabetical order) (Amazing! there are now at least 19 made up the hard way by gathering up all the pieces and 5 more in build) Once the project expires I will not be able to add any more names so please leave a comment and let me know if you've built it or planning to and I will add you if I can.

Update : Well you made it an exciting day wondering if it would reach 5K,  about 9 hours left when it made it :) Thank you.

It is looking like I will narrowly miss the 5K milestone. I would like to thank everyone who has supported this project. It's come a long way from the original concept in LDD, thanks to your feedback it became a more accurate model of this amazing machine. At least a dozen have been built around the world too! Because it has evolved and moved from a digital design to a being built up in Lego I may resubmit.

As a bonus build to this project I included Little Joe II which was a test rocket for the Launch Escape System. For some of my other rockets I made paper wraps to add markings (e.g. Mercury Redstone). To aid analysis of the film of the Little Joe flights the CSM was marked in a black and white pattern which allowed the direction and rate of spin to be calculated. Below is a 300 dpi jpg file which add the marking to Little Joe II. For the Capsule cut out and tape the cone together, just drop this over the Lego cone and it is held in place by tthe girderwork for the tower. The other two wraps should be taped on one edge and wrapped tightly around the lego pieces and joined together. Wrapped tightly the paper will not slip out of place. 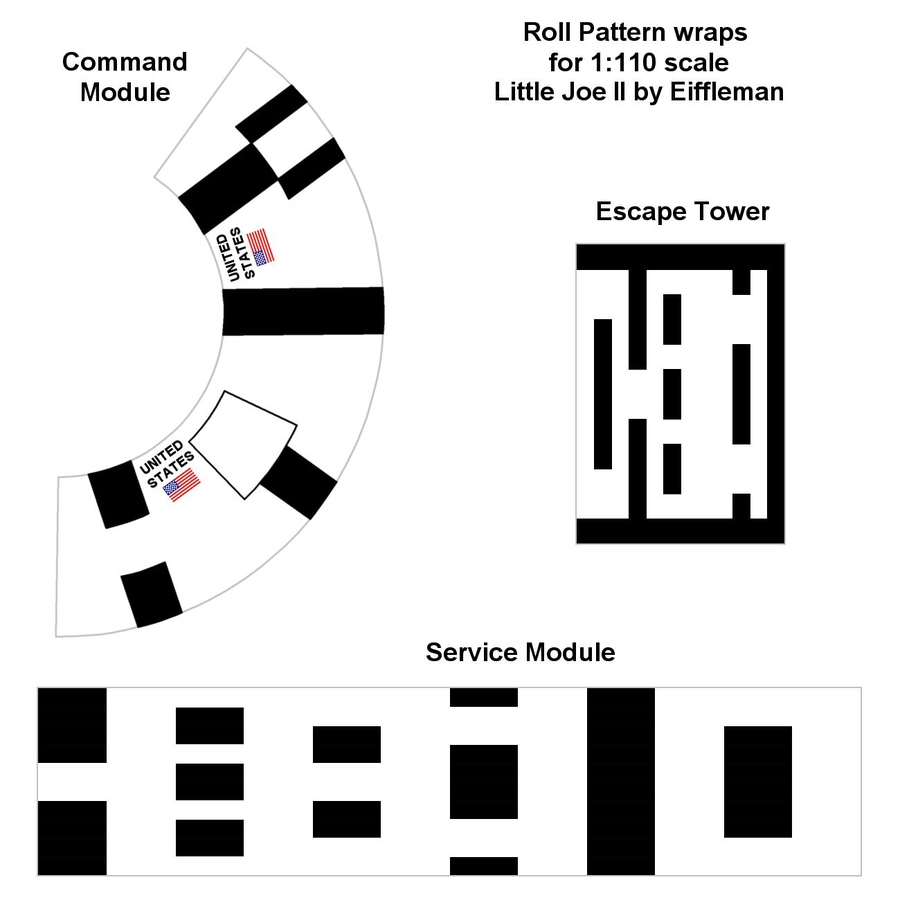 The following people have built this NASA Crawler-Transporter. (in alphabetical order) (Amazing! there are 15 made up the hard way by gathering up all the pieces)

If you have built it or are gathering parts together please add a comment and I will add you to the list. Also let me know if you complete the build and I will move you from 'building' to 'built'

dadelberg - reverse engineering my early designs to make their own Crawler

ThierryLang - Who has built two Crawlers and devised a means to raise the deck of one of them to lift a LUT and Saturn V off a huge Lego model of the Launch Area. Testing the strength of the Crawler build - proof it up to the job.

Not Building the Interior?

The interior of Crawler is an option, you can either fit during the main build, leave out or fit at a later date. If you leave it out you will need to make some temporary supports for the top deck. I suggest the following. 5 in number 3x2 plates on the sides of the crawler. 5 block supports each made up from 2x4 bricks (x4) 4x4 plates (x2) and 2x4 flat tiles (x2). As it will all be hidden you can use any colour or any alternate pieces you may have. By building with bricks on the bottom you will be able to easily remove the suppports if you decide to add an interior at a later date. 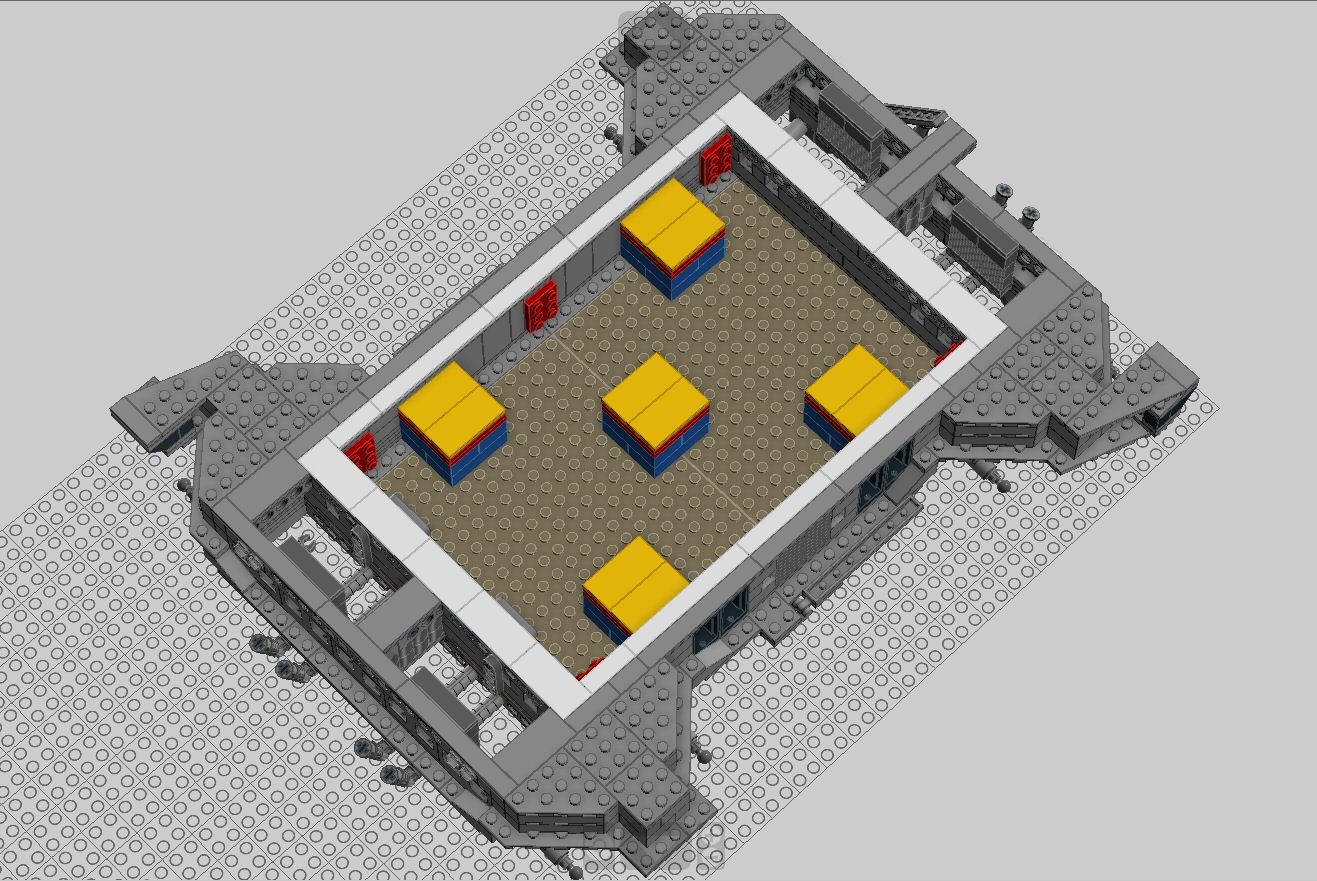 This is KingsKnight's 1:110 scale Space Shuttle with my own NASA Crawler-Transporter and MLP (I have added a graphic of the stickers I made up for the Shuttle) 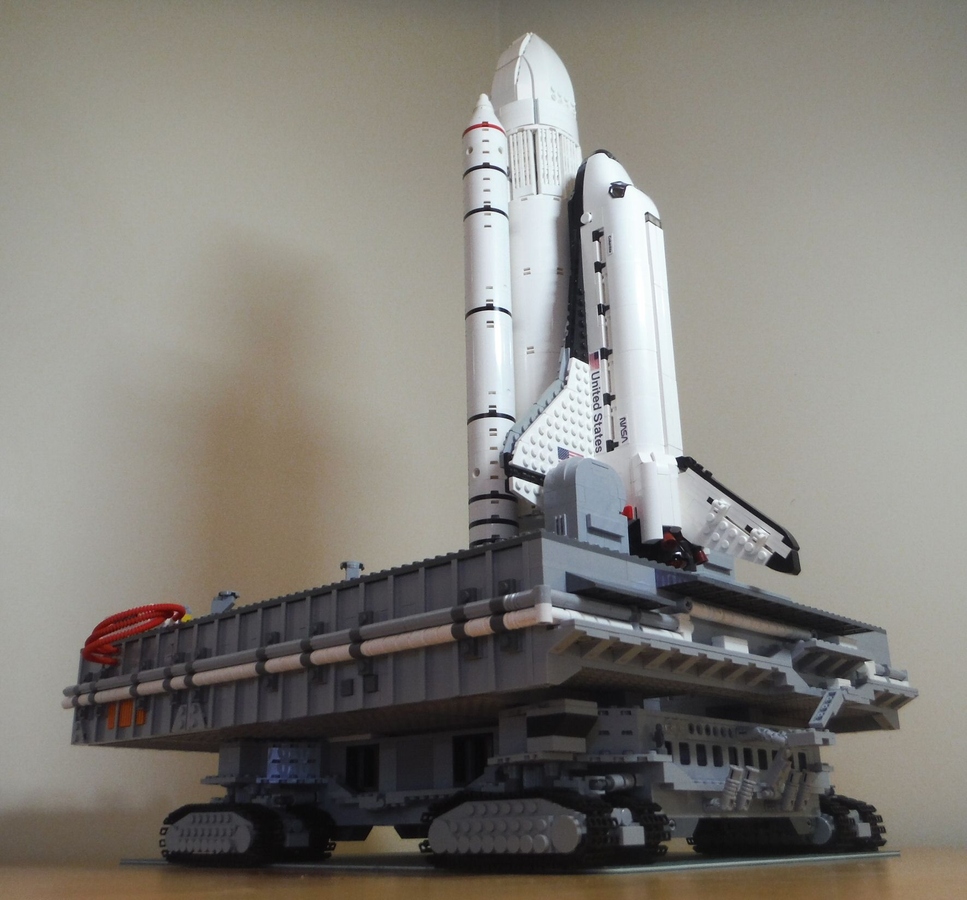 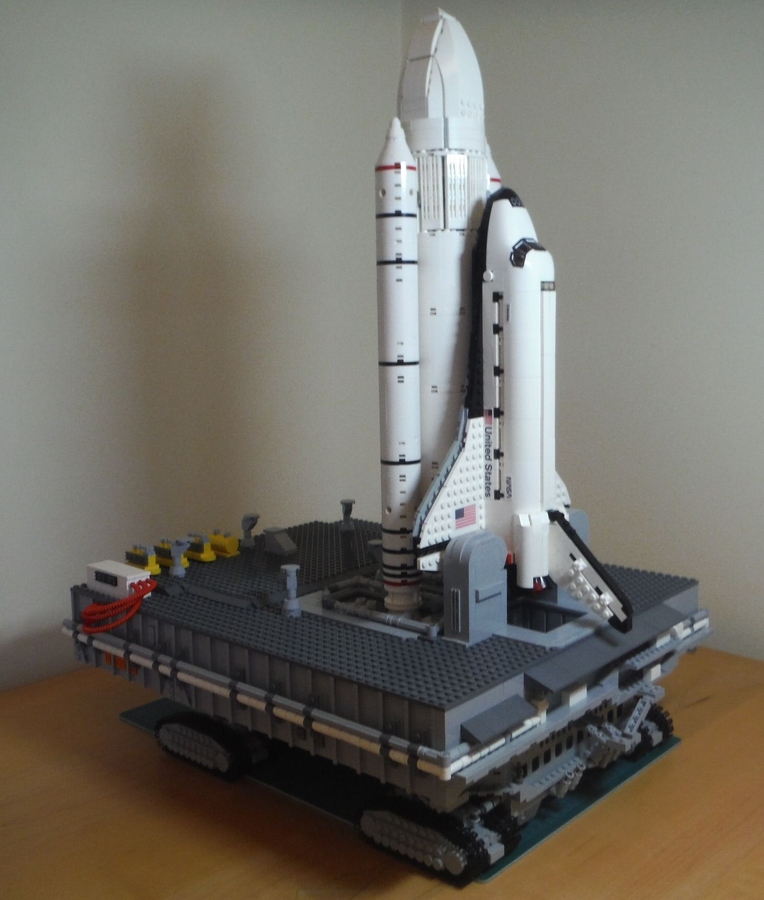 After a year here is my complete 1:110 scale space collection. 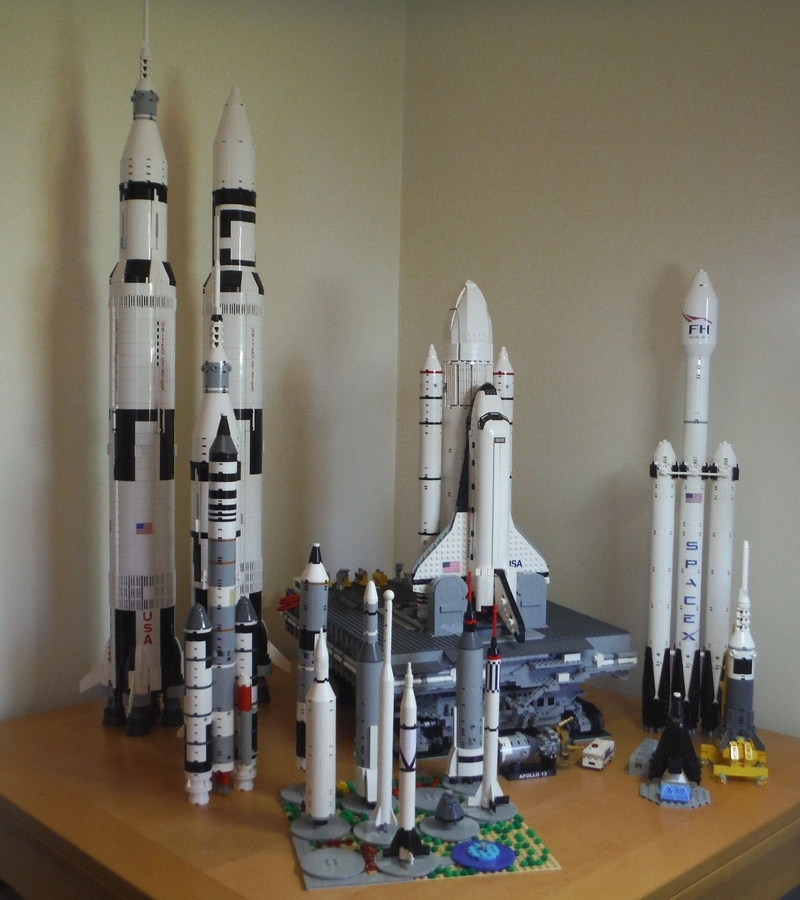 I was asked for some MLP detail photos... 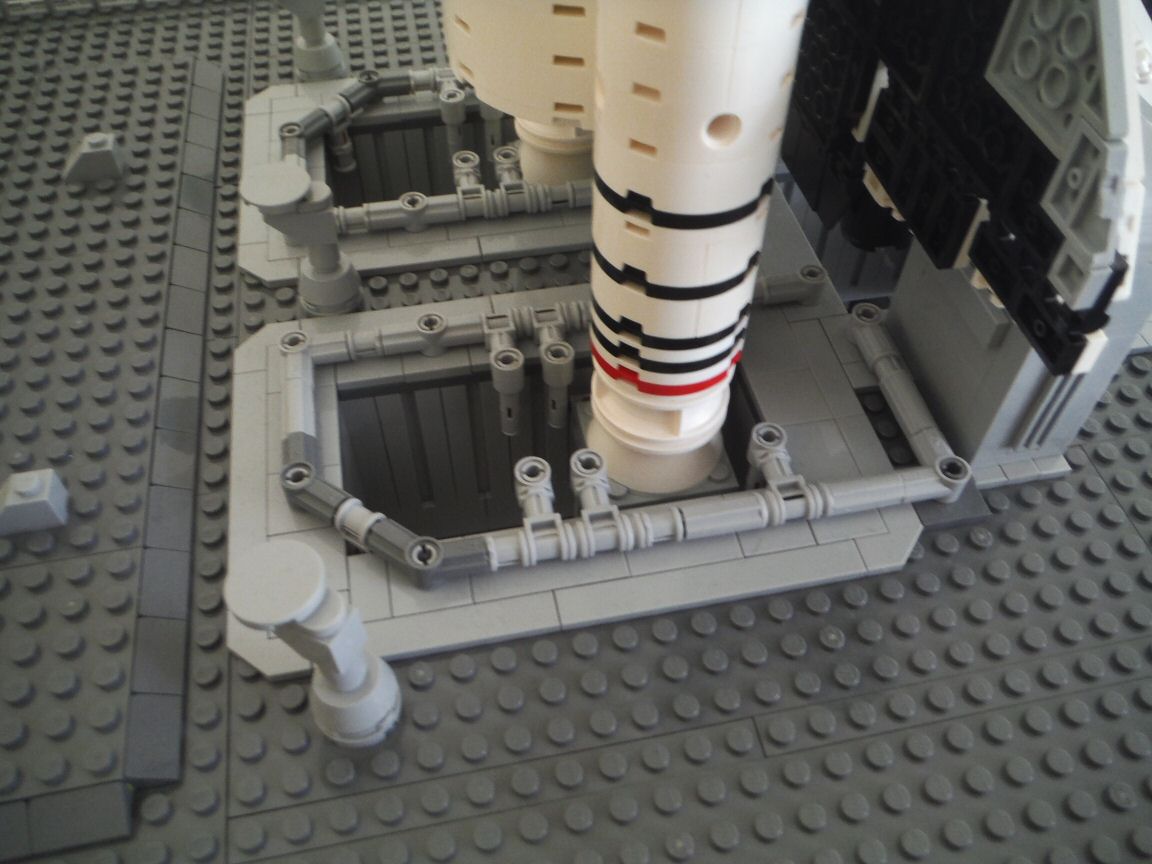 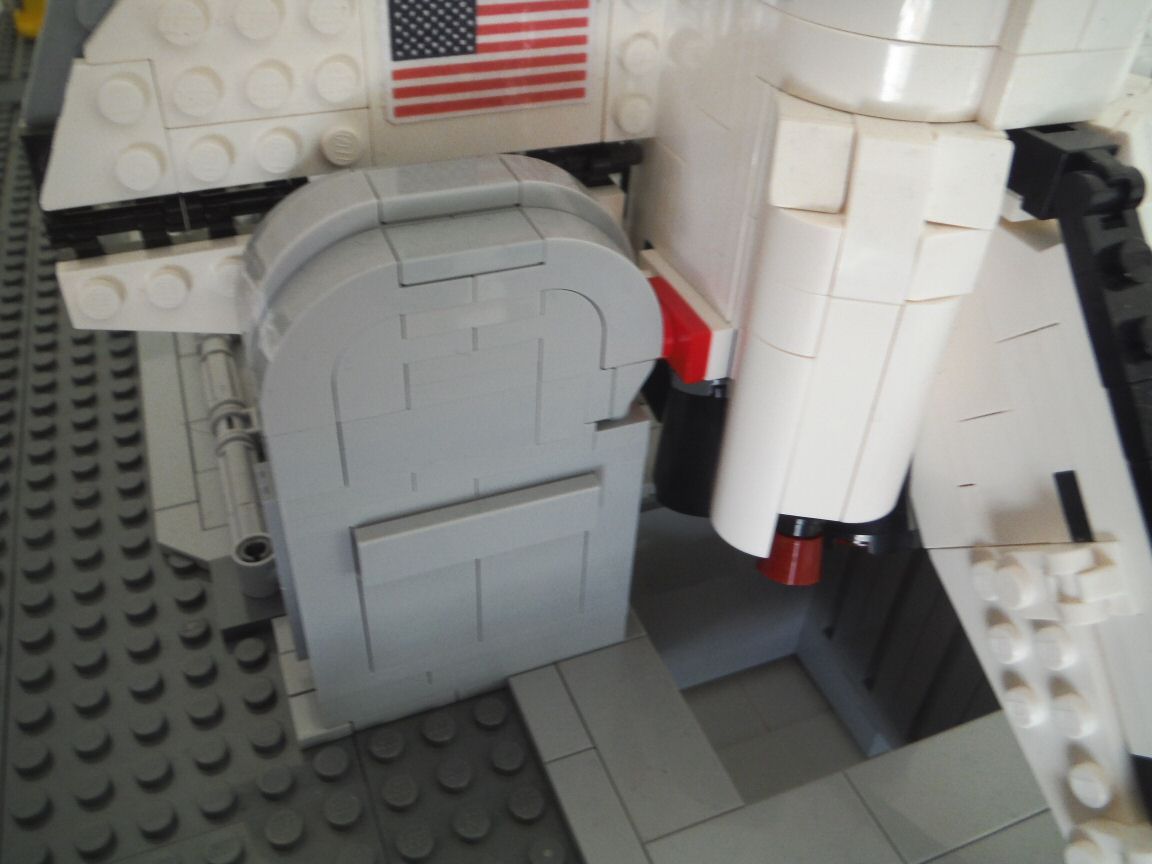 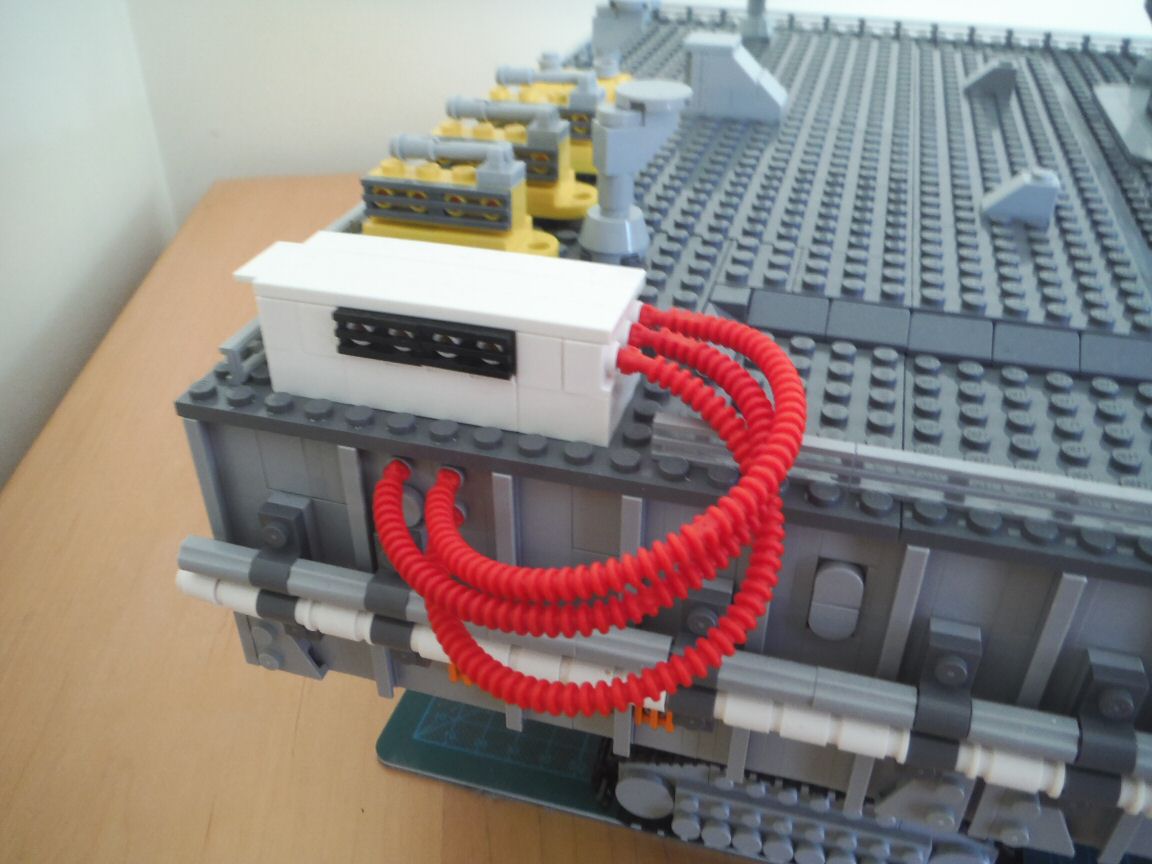 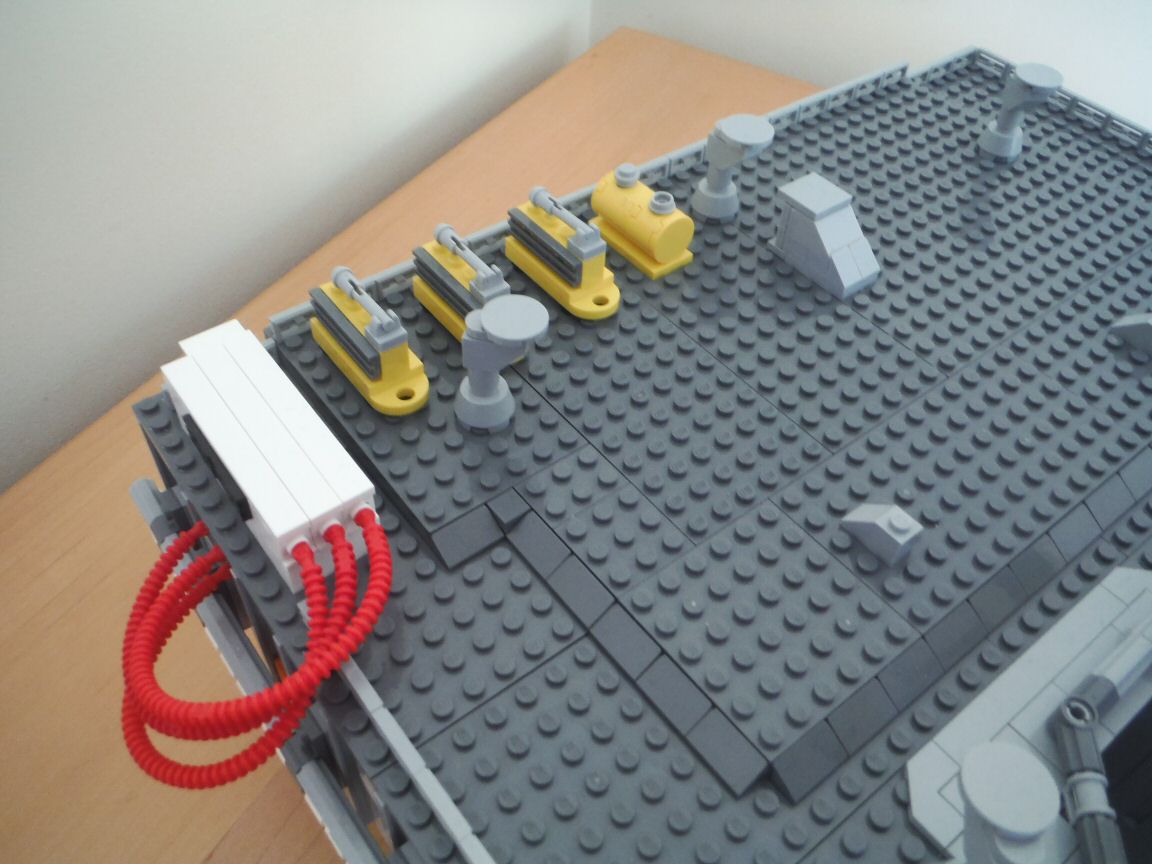 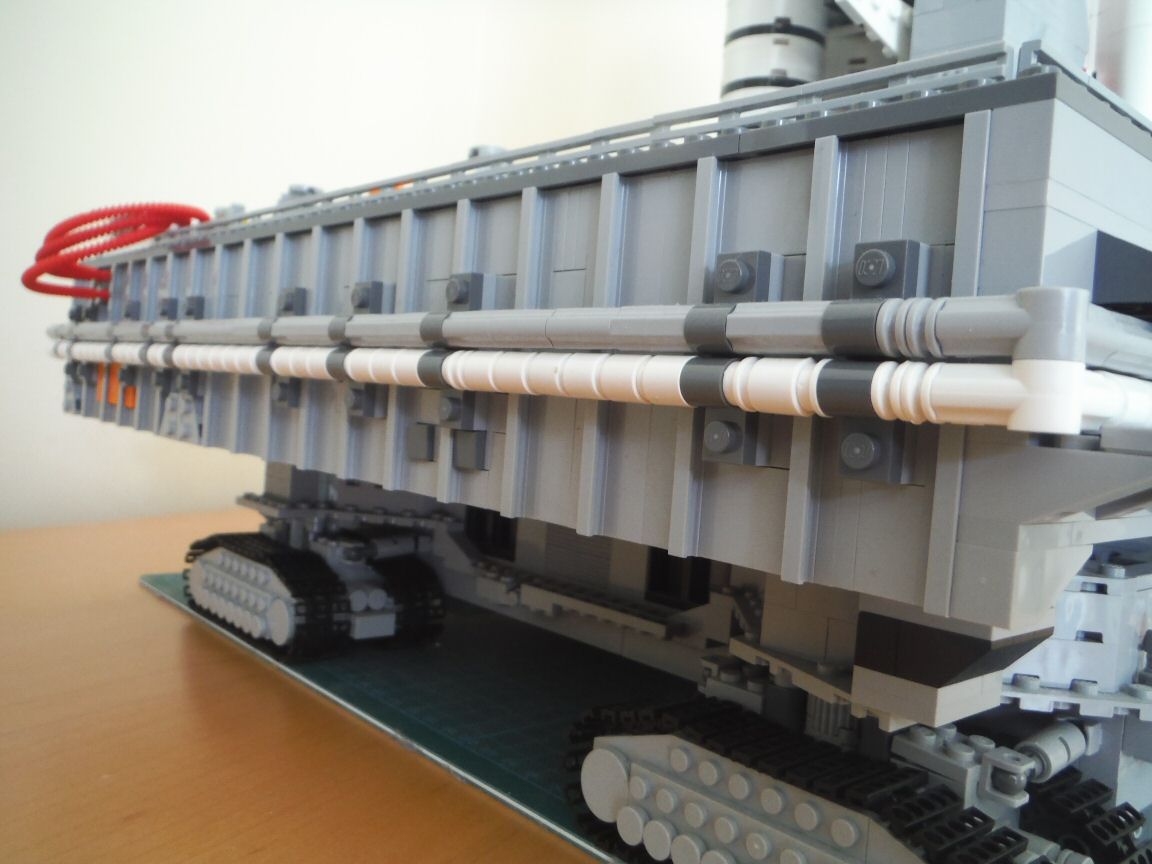 Like the Crawler the MLP has a long history, built originally for the Apollo Saturn V, heavily modified for the Shuttle programme and now being readied for the SLS.

I have built both the NASA Crawler and KingsKnight's Space Shuttle (which sadly did not pass the review, however, sufficinet information is becoming available to recreate his amazing build). To marry the two builds together I needed a MLP. Early days on the design but I thought it would be nice to show how I plan to eventually display my NASA Crawler.

The MLP on the Crawler 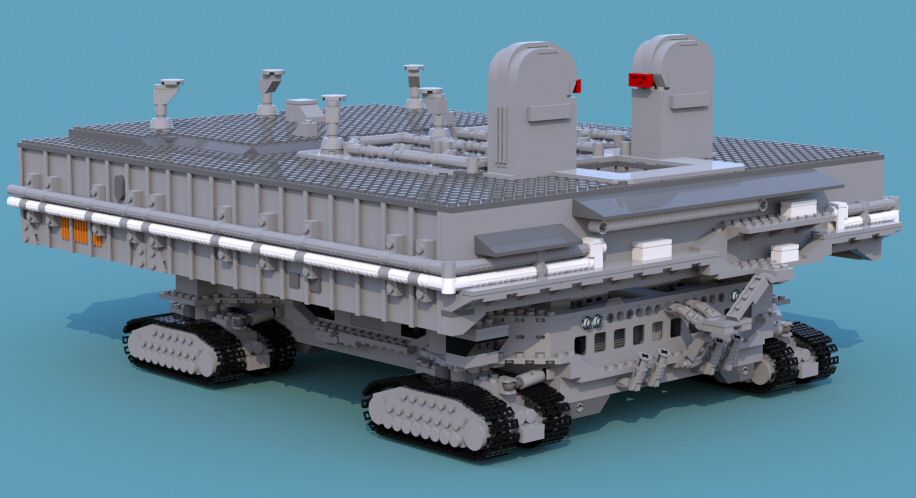 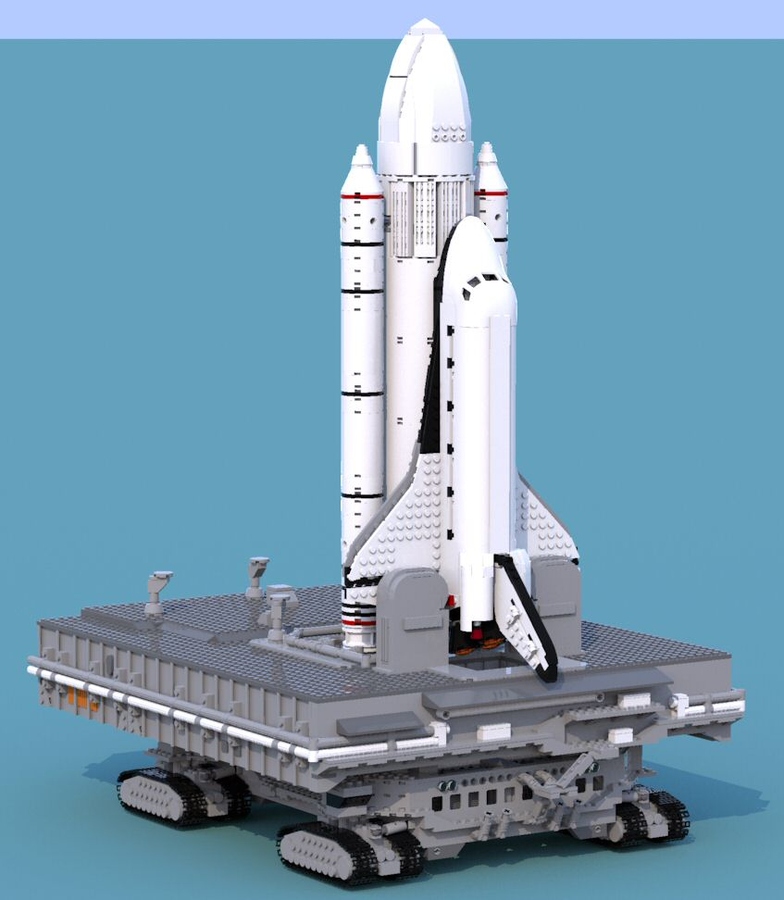 Still a little more work to do before this can be made up in LEGO.

It has been a while since I built up the final prototype for the Crawler. I normally post instructions once I am happy with the finished build. There were a couple of reasons for the delay, firstly the instructions originally ran to hundreds of pages, far too many to post - the suggestion to do the interior as an option actually significantly reduced the complexity of the instructions, and secondly there is quite a large cost involved, to buy this as parts takes a lot of time and money.

Included below is a list of the things I've identified with the build that you may want to consider before committing to make your own. I really wouldn't want you to go to the trouble of gathering all the pieces and making the Crawler only to be disappointed because you discovered any of them for yourself.

Lets start with the positives - The Crawler-Transporter is designed to the same scale as the Saturn V. The model is strong enough to support the Saturn V (but has not been tested with a launch pad and Tower). Personally I think this would be better to match the Crawler with 1:110 Scale Space Shuttle and pad - I had high hopes for the recent review model and can only hope that it was rejected because LEGO already have one in design.

As I wouldn't want anyone to find any surprises with the build here the things you may not like.

1. Exhaust stacks use click hinge connectors to set the angle, I sometimes knock them and have to reposition them. (the hinges look better than the  alternate fixed pieces have holes through them)

2. Picking up the model I sometimes move the side hinged access gangways

3. It is best to pick up the model from the side as the bottom row of the front and back structure have bricks which are only held on by their studs

4. The top deck is a tight fit - I had to add the two levers to pop the lid open and one edge is only one plate thick as it was impossible to fit when it was two plates thick. The thin edge goes to the rear of the Crawler.

5. The first time you fit the track units it is a little fiddly and can take a few goes to adjust the length of the hydraulic rams so that the tracks are parallel to the Crawler body. Setting them means fitting and removing the track units a few times (once set there is no issue). TIP - its easier to take off the two 2x2 plates with the ball socket and leave the two side rams attached to the body than try and separate the ball socket connection.

6. The large hydraulic fluid tank in the middle of the interior is only held by one stud (the second stud just keeps it aligned so that it cannot turn), this has not proven to be an issue as I have inverted the model and it doesn't fall out (when the top deck is fitted the tank is sandwiched between the floor and top deck and cannot move)

7. Building up the 8 sets of track is a bit of a chore - the only part of the build I didn't really enjoy. it took about 20 minutes, and if this were a set I would recommend spreading the track building out in the instructions.

I also made the following comments earlier about the tracks

As I have said in a previous update the track is loose - not to the point where it can come off but it does sag when you lift the model up; this actually is a benefit as the loose track means that the top of the tracks move in a wave and look like they have a lot of weight.

One note about the complete build is that with eight tracks pointing in one direction the Crawler only wants to move forwards and backwards, it does not want to turn - at least not on carpet. The real crawler has driving cabs at both ends to avoid having to turn too much.

Notes about the track units

If you want to use it with a launch pad of your own design I would recommend designing it so that the load is carried on the tiles which surround the top deck cover, my design principle was to make the front and rear rows of tiles the strongest as they connect directly to the track units.

If I were to make up a LUT and put the SatunV on it just to be a display piece I would also look at adding sone supports so that the treads are not taking the load, a couple of panels on the bottom of the track units would not be visible.

Additional - Building without an interior

If you make the Crawler without the interior you will need to add some supports for the top deck. The top deck sits on top of the four triangular entrances and the triangular hydraulic tank in the middle. The 3x2 plates (which have the 6 black circles (to represent banks of ventilation fans) help to stop the edges of the top deck being pushed to far down. I recommend adding the 5 in number 3x2 plates and making up 5 in number support columns 4x4. They will need to be made up as 2 rows of bricks, 2 of plates and the top as tiles. Put them where the entrances are and one in the middle.

Please read the above notes and study the instructions, its probably worth building one track unit just to make sure you are happy with the track arrangement before going all out on the build. As always it would be great to see any that are made up.

Design discussion to follow, lease read this first before deciding to build. 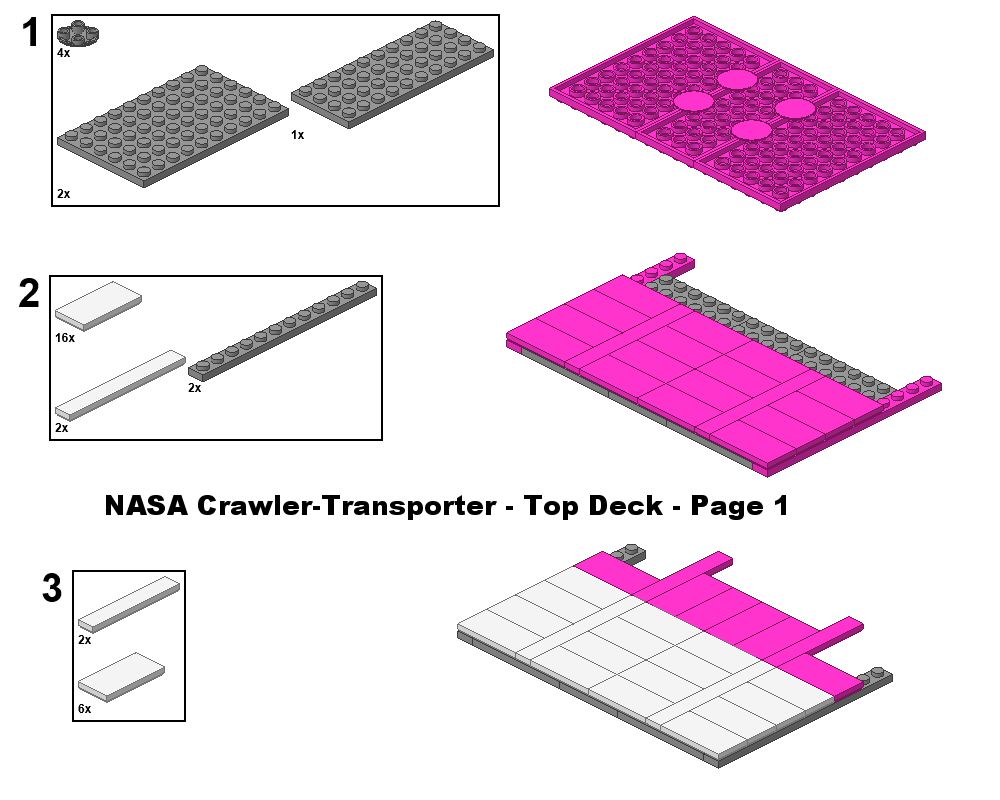 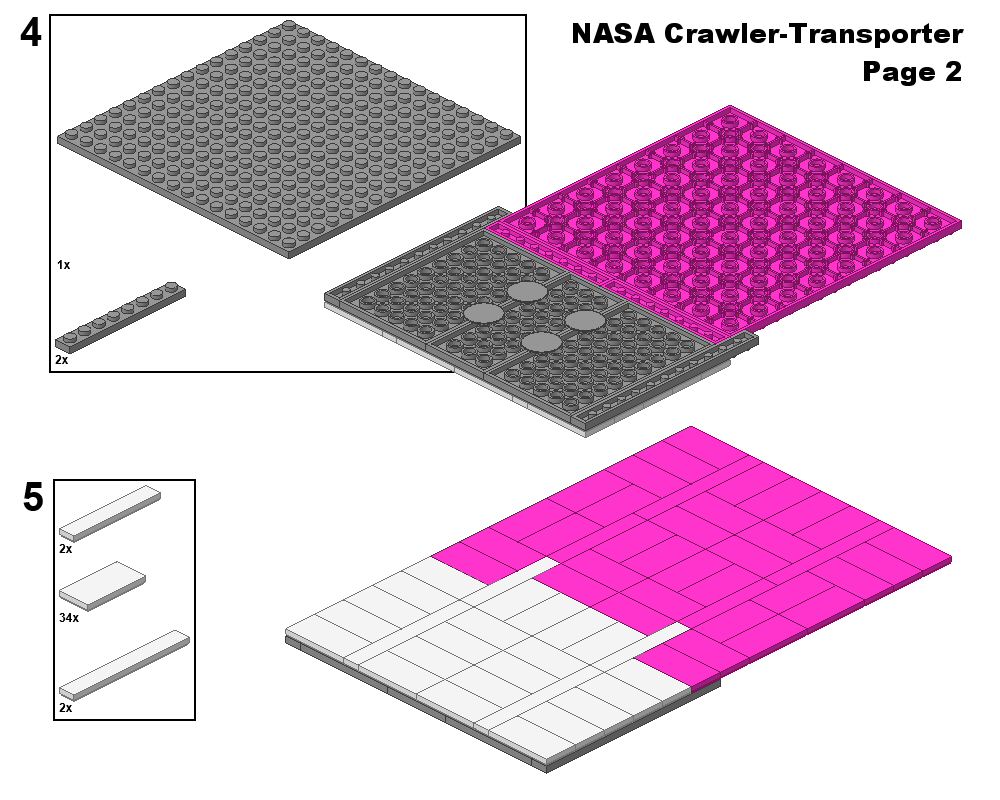 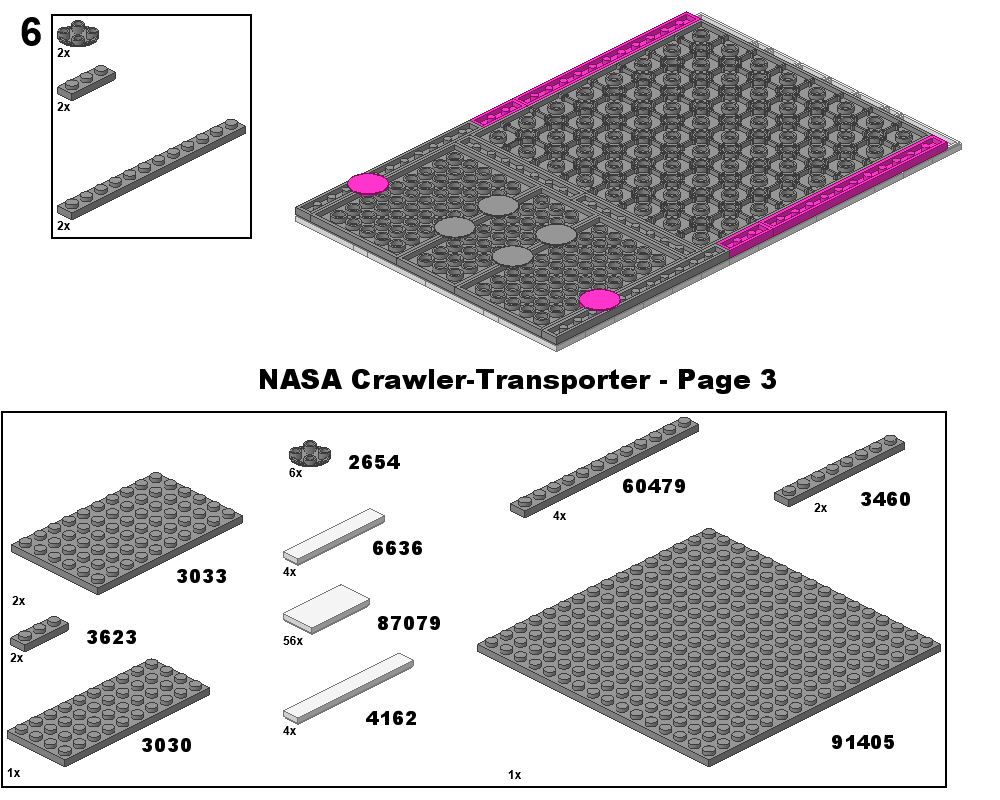 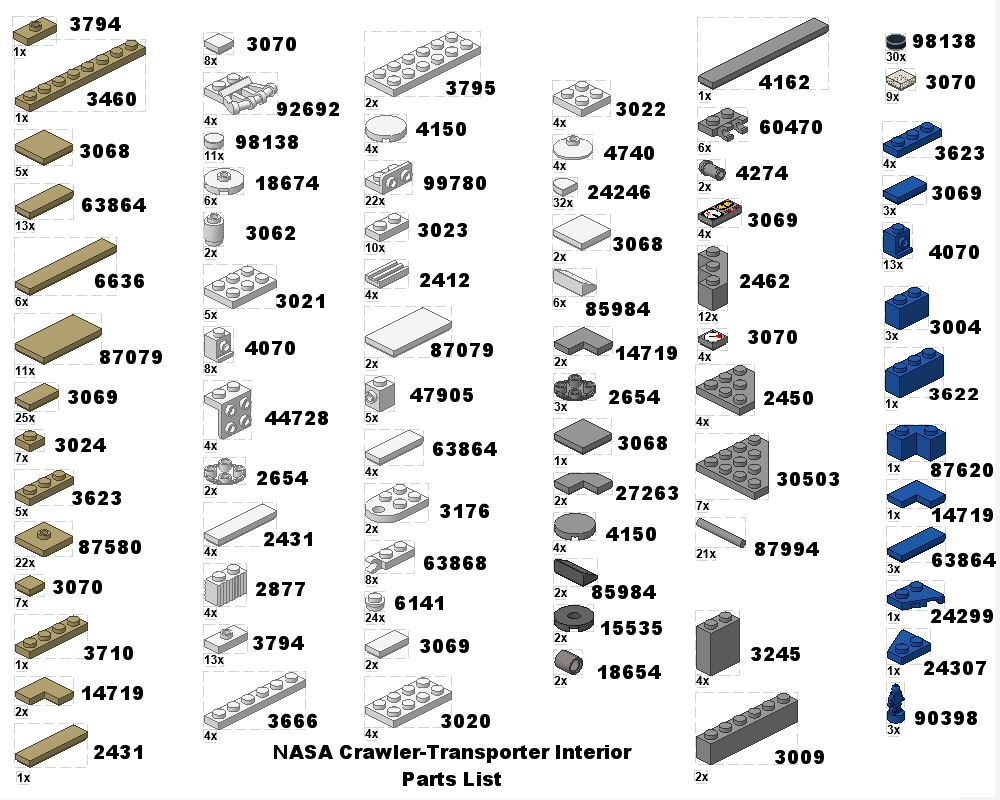 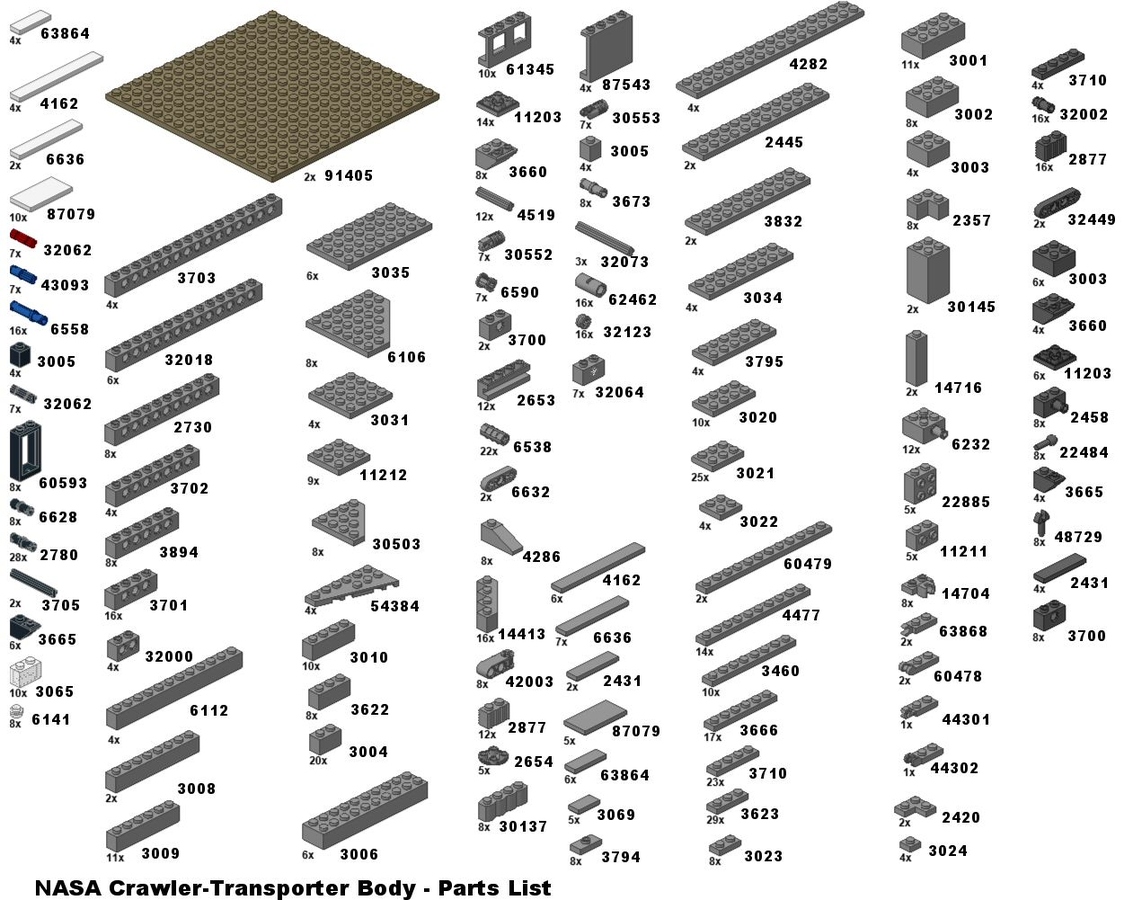 I will be adding an update with a review of the build to help you decide if you want to commit to the build. 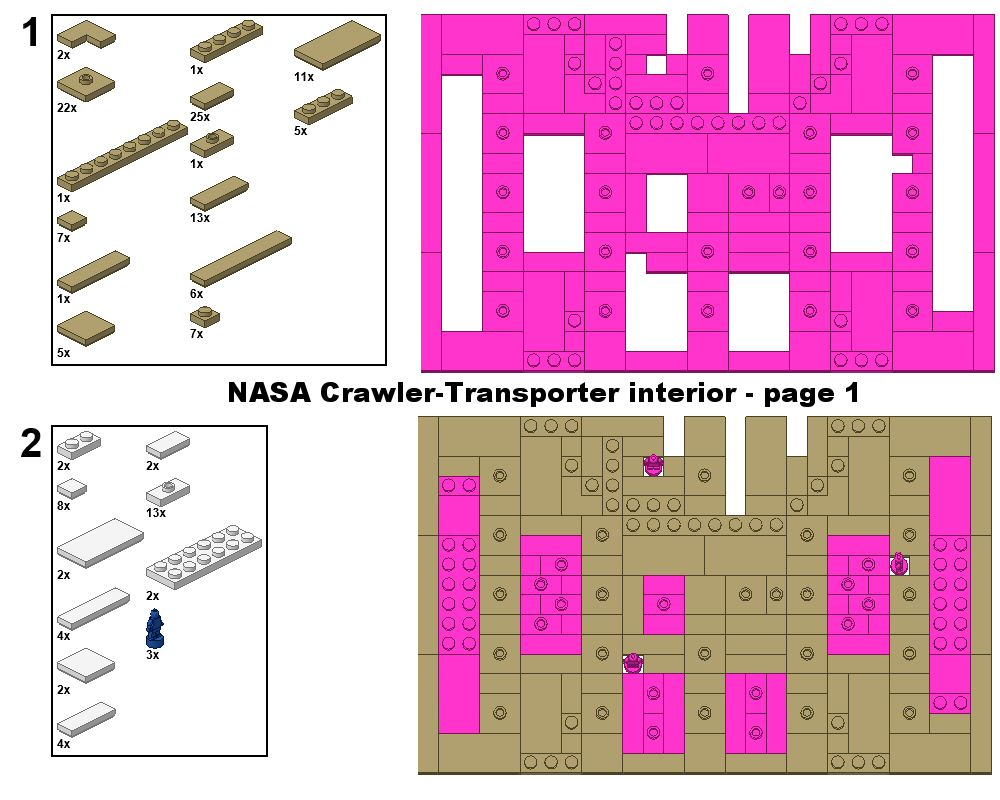 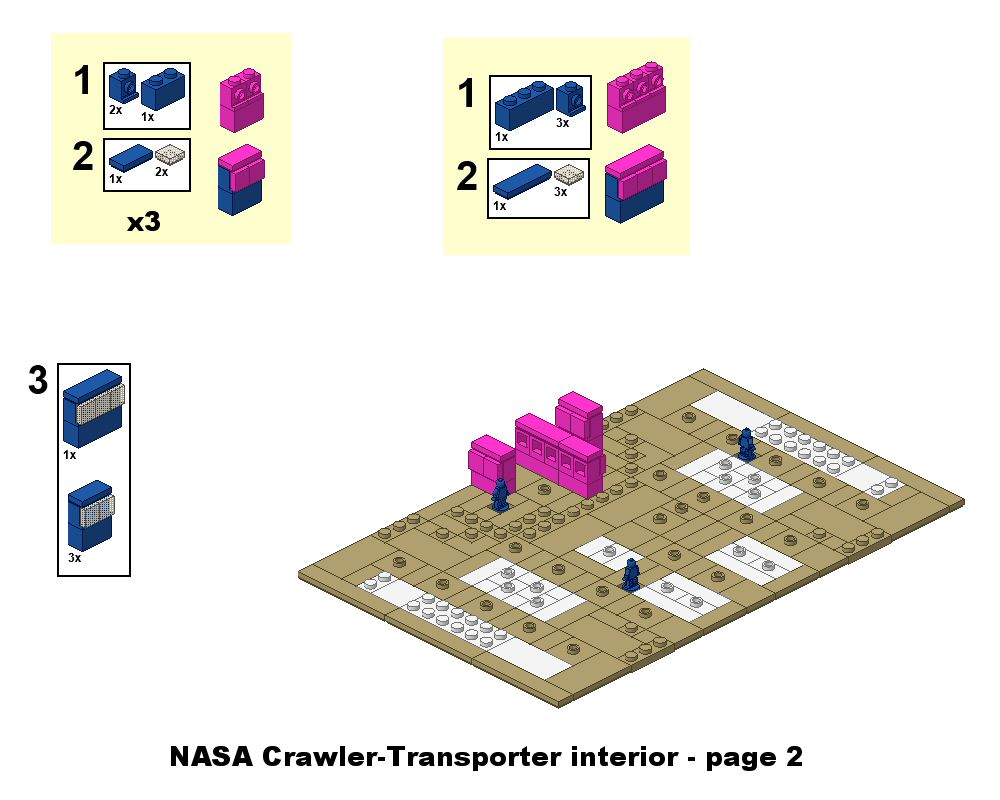 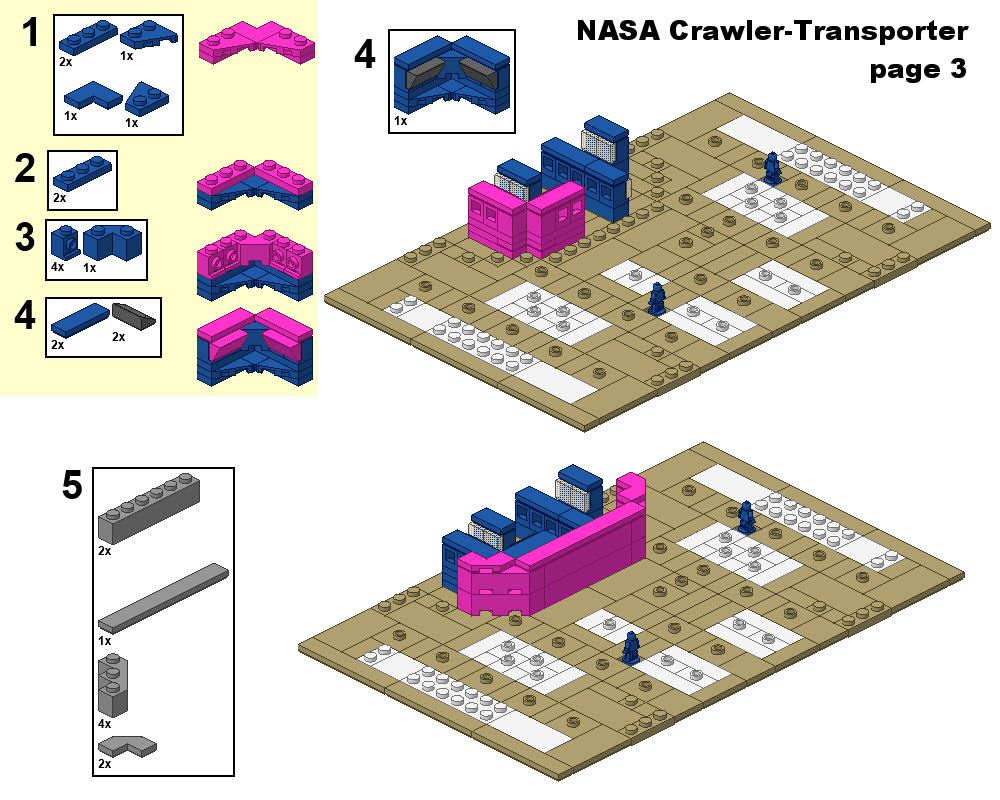 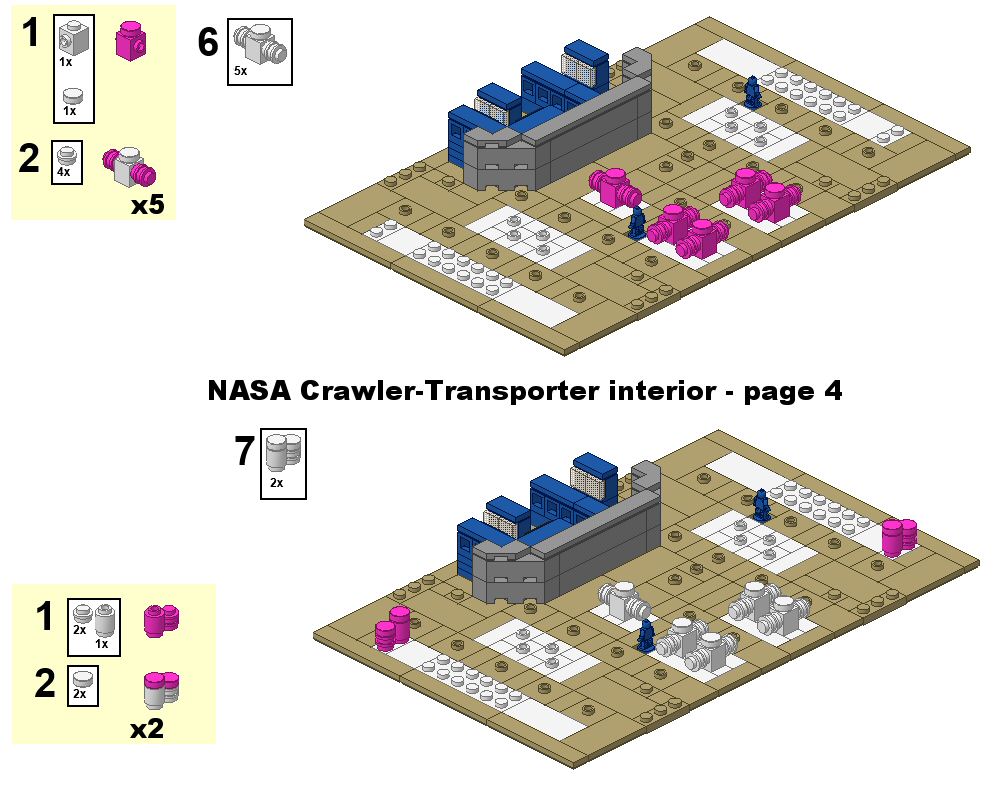