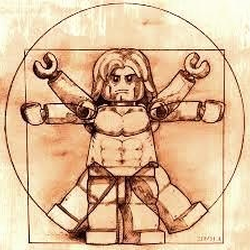 Here is my second project for Lego Ideas. It's my version of the Italian FS Class E 326 locomotive.

The E 326 were introduced in the early 1930s, for hauling passenger trains at relatively high speed. During the tests the locomotives reached a top speed of 140 Km/h, but reliability problems caused in 1936 the reduction of the maximum speed to 105 Km/h.

In the course of World War II, all the 12 units produced were damaged by Allied bombings. They returned into service in 1949 with light modifications, including this new brown color scheme.

The maximum speed was further reduced to 90 km/h in the 1960s. The E 326s were retired from service starting in the 1970s, and demolished. Today only one unit survives, preserved in the National Railroad Museum of Pietrarsa, near Napoli.

Here i try to reproduce a piece of Italian train history in a toy version. I hope You like and support it.