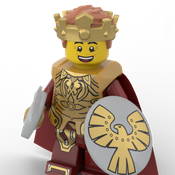 Here we go off to Neverland, with my project The Jolly Roger which is from Walt Disney's 1953 classic Peter Pan. This project is based off of Peter Pan's notorious enemy Captain Hook's pirate ship the Jolly Roger. Captain Hook has captured Peter Pan's friends and it is up to you to save them by supporting my project so we can make it into a set.