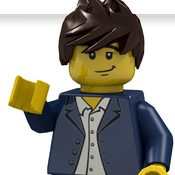 The AX-249 Predator is a heavy fighter meant for short range attacks and ground support. Powered by twin VTOL fans, the predator can stay airborne for over 13 hours. Its armament includes two eight-barrel rotary cannons, sixteen hellfire missiles, and four newly added laser guided concussion rockets. Despite the Mark II's still relatively low airspeed, 387 mph, its extreme maneuverability and agility allow it to operate in a vast range of situations and landscapes, from the jungles of Brazil, to the peaks of the Rocky Mountains. The Mark II visibly differs only slightly from the original Predator, despite the vast array of improvements that include an advanced targeting computer able to track seventeen targets at once, modified wing tips that enable better flight control of the vehicle, a modified cooling system for the engine, and an area in the rear that can serve as a cargo or bombing bay.

If you would like to see the AX-249 Predator Mark II as an official LEGO set, please support it and share this project on any social media websites to get as many people as possible to see this. Only you can make this a reality!