The Great Sphinx of Giza 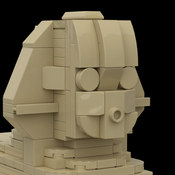 I am pleased to introduce the Great Sphinx of Giza, my first entry in LEGO IDEAS.

The giant 4,500-year-old limestone statue, situated near the Great Pyramid in Giza, is one of the most recognizable relics of Ancient Egypt.

73 meters long and 20 meters high, the Great Sphinx is one of the world’s largest monuments.

Carved directly from the bedrock, its body suffered major erosion and its face became damaged with time. The original shape of the Sphinx was restored with layers of block, especially the lowest part of the body, including the legs.

I always dreamt of creating the Great Sphinx in LEGO. It was my first MOC as a child, with a human-size LEGO sculpture of the Sphinx's head, on which I spent days of hard work – and all my bricks. It was well worth the effort, allowing me to win the Grand Prize of a LEGO creative contest organized in my city.

The idea behind this new creation is to represent the Great Sphinx as it is today, as accurately as possible, at LEGO Architecture scale.

I tried many alternatives to feature the uneven degradation apparent in the Sphinx's body. I also explored numerous variants of its head to take up the challenge of representing it faithfully at that size with existing bricks only.

I sincerely hope you will enjoy it.

Thank you advance for your support.