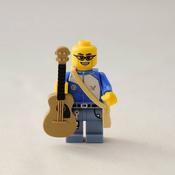 Adventure is Out There! – Disney’s Up

By 2019, It would be 10 years since Disney and Pixar released Up. Let us celebrate 10 years of adventure with an official Lego set?

Up is the 10th 3D computer animated film by Pixar. Up captured the minds and hearts of audiences wishing to go to their own great adventure. This is the story Carl Fredricksen, a 78-year old widower, and Russell, a wilderness explorer. In his desire to keep his promise to his beloved wife, Ellie, Carl set out to go to the wilds of South America by tying his house to thousands of balloons and fly. On the way to his destination, Carl got an unexpected travel companion in Russell. Together they journeyed to bring Carl’s house to Paradise Falls amidst the dangers of the wild and developed a strong bond.

This set hopes to inspire people to set out in their own adventures and more importantly, to create relationships of a lifetime in building and playing with it. Please support this model in Lego ideas and share this in Facebook, Twitter, and other social media.

Inspired by the Up house, this model was built with the intent to capture the form of the house in the movie and its major features. Its exterior features Ellie and Carl’s mailbox, the water hose, and the rooster wind vane. The interior includes, the painting of paradise falls above the fireplace, a picture frame of Ellie, their jar full of coins and their iconic chairs. The model also includes minifigs of Mr. Carl Fredrickson, Russell, Dug, Charles Muntz and his dogs, and a brick built Kevin. Another special feature of the model is the removable roof so that minifigs can be placed inside and played with.

This model can be displayed in two forms as featured in the film. It can be like a normal house that is placed on top of a base plate and it can be like the house that flew which is elevated and has balloons on top.

The model was built in the same scale as other Lego creator houses or Lego modulars. Thus, it can also fit perfectly in a Lego City  community.