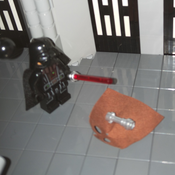 Welcome to The Changing Seasons, one Theme, multiple Scenes, and endless Ideas.
The Concept:
The Changing Seasons is a new way to look at and play with a Lego build, I like to think of as Lego Tectonicks (yes pun intended). Just as the Earth’s plates move about over time, creating new landscapes, this build also moves about making a different landscape from the original (in less time).
By using four hinged base plates, the scene can be changed from one design to another without rebuilding.

There are 5 main changes and four minor changes that can be achieved just by pivoting the plates around each other.

That’s 9 different ways of arranging and playing with the one build!

Initially built as a park theme depicting the four seasons, summer (dk green), autumn (beige), winter (white) and spring (light Green), it soon morphed into the most playable scene I’ve ever made. My whole family keeps wanting to just move it about, it is quite addictive. You can also rebuild the scene as whatever you want and get a great effect, my family have made a central island turn into a lagoon surrounded by four islands, a mountain range turn into a valley and heaps of other scenes, the only limit is imagination.

Starting with the tree in the centre, opening the scene out between summer and spring, gives us the first change - four seasons in a row, with 1 half fountain, 2 quarter fountains and 2 trees.

Folding the two ends back again, produces the alternate start scene, a central fountain with trees at each corner.

From the first change to four in a row, pivot the inner two scenes to make the second four in a row - four seasons in a row, now with 2 half fountains and 3 trees.

Pulling the scene sideways gives you a staggered diagonal view.

From the four in a row configuration, we can make 4 different L-shape scenes.

The story is about people spending time in the park, alone or together, each in a different season. The tree reflects the season of the plate it is built on, it moves from dormant to flowering, to leafy-green, to deciduous, with the people also reflecting all the seasons of life, there are young kids making a snowman with their grandmother watching, in winter. Spring has a lone figure playing ball with their dog, summer shows two people of middle(ish) age having a picnic, and Autumn finds two young artists capturing the colours and shapes of nature. Then there are two lone walkers, just enjoying the park, one with a camera.

There are animals in the tree, a white owl in winter, a squirrel in spring, a beehive in summer and birds in autumn. There is lots going on, but I tried to keep the activity to only a couple of people in each scene.

I really like using SNOT effects in my builds to give a smooth finish, but I deliberately left most of the studs open on the base plates to let people create their own scenes.

The main aspect for me, is the creative, open-ended play it brings out, the story can be whatever you make it.

With 519 parts in a 32x32 start size, this is an easy build for most ages and abilities, the techniques are simple, with the tree parts posing the only real challenge. The build is stable to move about and to change scenes, with the plates clicking together in the two starting scenes.

This is a set I like to play with and display, maybe others will too.

UPDATE - June 2021
Thanks for all the support so far everybody.
I've made some modifications to the tree to give it a stronger trunk and a bigger canopy. I think it makes each scene more detailed and better developed.
I was inspired by the Lego diversity set to changed two of the people in the snow to be better representative of other Lego users (not sure the yellow snow will make the final cut :-)
Please let me know if you do or don't like the changes, I can accept honesty delivered respectfully.