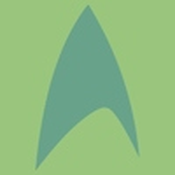 Behold, the new face of Kong!

I saved the trickiest bit for last on the mark II remodelling of Kong, his face. I quite liked the old face, but felt it was very much an impressionistic take on a gorilla, lacking the character of Kong. The detail of the brow was also all wrong, set back from the eyes, rather than above them. 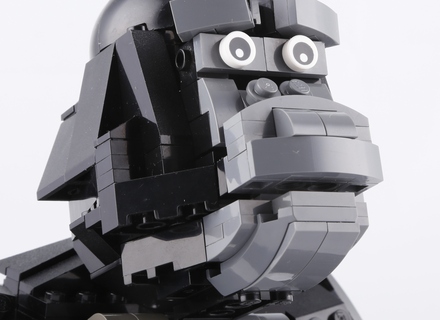 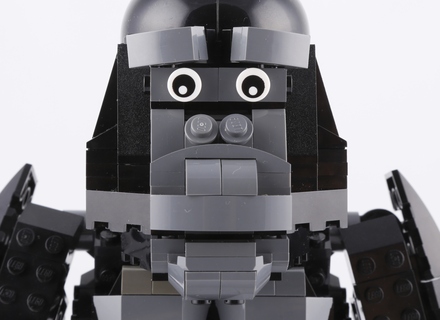 I went through many iterations of the new face, struggling to get the details and proportions to work, but have finally landed on what you see here, which ended up not retaining any of the details of the mark I face. I hope the new face comes across as more expressive, emotive and characterful. Much of this comes from the use of the new printed eyes from the Mixels sets, which are maybe a little more cartoony than is ideal - If this ever did get made into a set I would hope new printed eyes that are more gorilla-esque might be created. For now these eyes will do though. The brow design also means they can move, which gives Kong some different expressions. 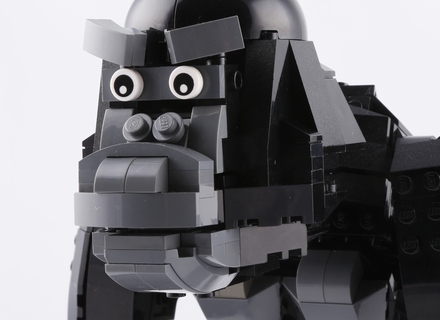 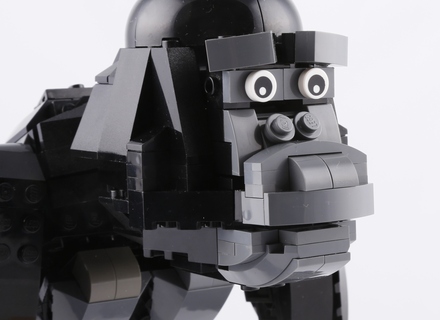 While I continue to reference both the the 1933 and 2005 Kong for this model, the new face is much closer to the proportions of the 1933 version. 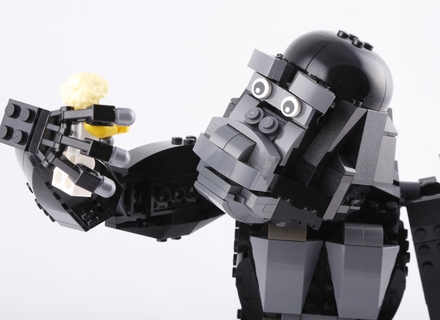 I've finished re-modelling Kong (for now), so next up, its time to build some dinosaurs! 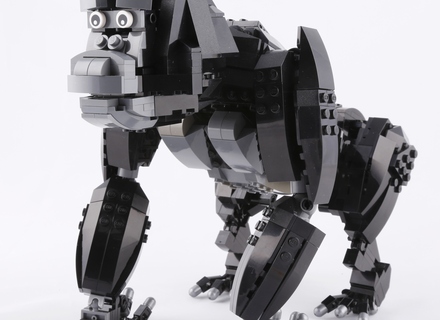 PS, I formatted most of these images to be square, which were then automatically reformatted to horizontal rectangles by cropping, when uploading them to Ideas. You'll find the uncropped versions of my Lego blog, The Brickverse.

Continuing work on updating my Kong model, I set out to improve his back legs this week, but before I knew it that lead to me reworking bottom, arms, and chest too! 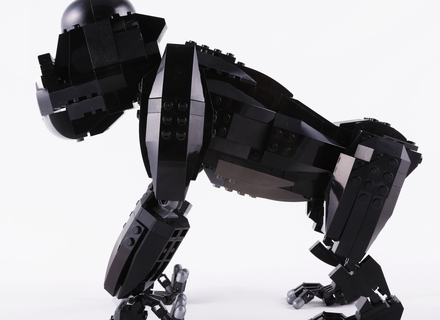 My initial objective was to redesign his legs to allow him to stand upright. Kong does this a few times, most notably right at the top of the Empire State Building, so I felt it was an important pose for the model to be able to pull off. The mark 1 Kong could almost do it, but because of the shape of his legs and the body around them, they had to be twisted in at a weird angle. It was also perilously unstable! 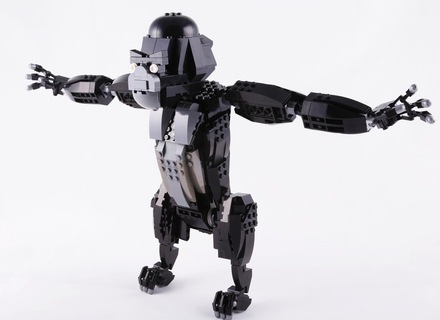 To make the pose possible I decided to use a completely different hinge, the really strong technic beam joint found in AT-AT walker sets. This made for a really stable joint, but also meant completely redesigning the leg and adjacent body to build the beam ends in, in place of the brick connected joints I used previously. I also made the legs come out from the center of the body slightly further, so they have more freedom of movement without hitting the sides of the body. All the rebuilding also meant Kong’s bottom was destroyed, so I completely redesigned that to look better, and fit around the new joints.

With the new legs done I could now pose Kong standing upright, but realised I couldn’t spread his arms out fully. That meant he couldn’t do another iconic upright pose, from when he is chained up in the theatre. This had to be remedied! The problem was that I had built the shoulder joints too low down, towards the center of the side of the body, when they needed to be towards the top. So I rearranged that, to get the shoulders in the more anatomically correct position. 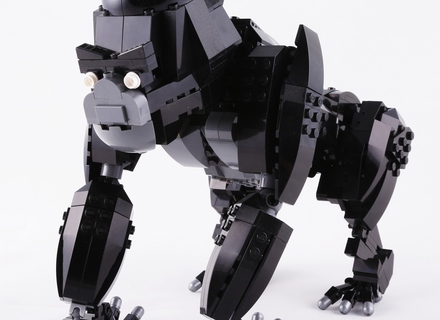 In all this rebuilding I also noticed the proportions weren’t quite right, so I have lengthened the arms, while making the legs a little shorter.

Pulling apart the upper torso to reposition the shoulders, I also thought of a better way to build Kong’s chest, so it’s not a much more organic shape, rather than the quite boxy form I had before. 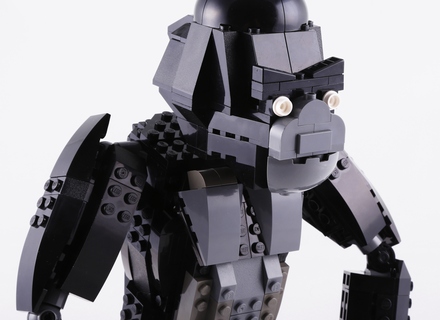 At first glance the new Kong body seems quite similar to the mark I, but if you scrutinise you will see it is now much closer to gorilla shape, and is now capable of a wider range of more stable poses. 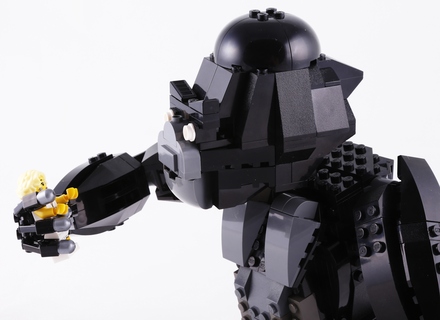 All I want to do now is get the head looking more like Kong.

I have started work improving the King Kong model, and chose to kick things off with improving his hands. This was motivated by the wrist connection being a weak point in the model, and the new ball-and-socket joints introduced this year offering a new way to connect the hand. 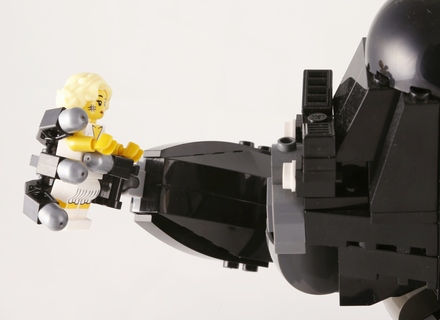 The new hand uses the ball joints, which alas are not available in black, so don't blend in seamlessly. I also redesigned the entire hand assembly, using two SNOT-plates to hold together many of the elements together in a sort sandwich, making a much more stable body part. This also allowed me to set the part holding the thumb on slightly further back, so the thumb now closes into the palm of the hand better. I also switched out the finger elements from the parts I had used a pen to make black (as the part is not available in black) to the grey colour the part is now available in, which more or less matches other "fleshy" bits of the model. 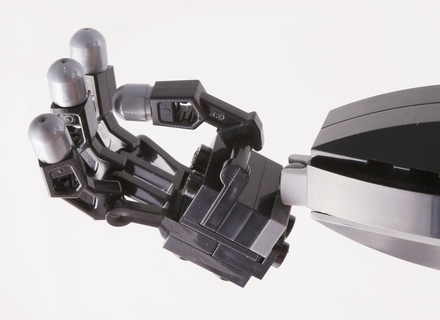 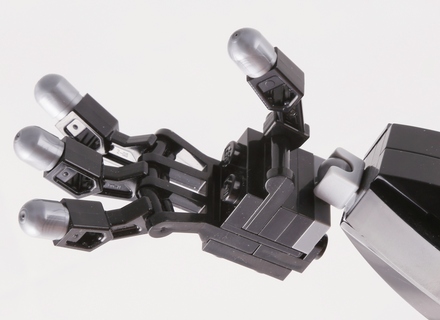 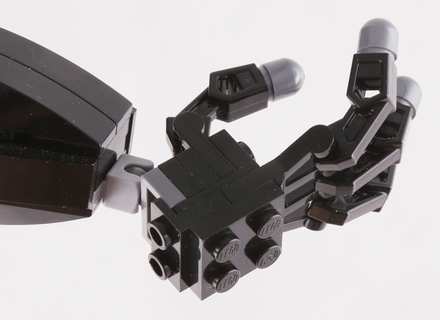 To test out his new-found dexterity, I treated Kong to a giant-sized banana. It turned out to be less of a treat for poor old Ann Darrow. 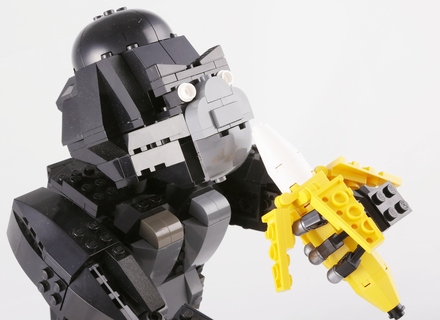 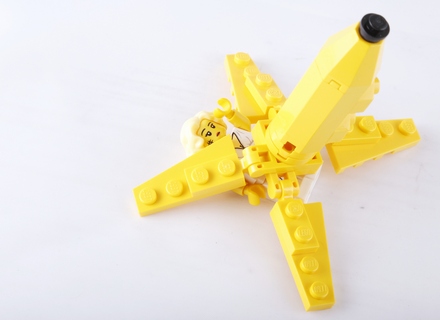