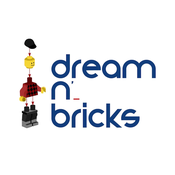 London, 1887
At 221B Baker street, in Mrs. Hudson's house, a detective under the name of Sherlock Holmes and his assistant, John Watson, investigate to solve the crime of the city and defeat the archenemy Moriarty.
The 221B is a deco-styled flat built by more than 2200 LEGO pieces.
-GROUND FLOOR:
The floor consists of the entrance, reception with a library and a pendulum clock, and a kitchen.
-FIRST FLOOR:
Climbing up the stairs to the first floor, there is a fireplace, where Sherlock and Watson used to solve the crimes, and Watson’s bedroom.
-SECOND FLOOR:
On the second floor, there is Sherlock’s bedroom, laboratory and office, where he used to study the cases and make experiments.
In this construction, I wanted to put some Easter eggs that refer to some of the famous crimes Sherlock and Watson have solved:
The dog’s head, from The Hound of Baskervilles and the snake from The Adventure of the Speckled Band
The construction is built on a 16x32 baseplate and the various floors can be removed and swapped. Furthermore, there is an English Carriage.
PERSONAL COMMENT:﻿﻿
In the design phase I tried to close the back of the build. The result would have negatively affected the aesthetics, as in the back I couldn’t have included the same details as the facade, ending up with an anonymous wall and a great waste of brick.
MINIFIGURES:
Sherlock Holmes
John Watson
Mrs. Hudson
Professor Moriarty