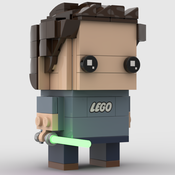 By Mr Brickhead
22 comments
Steampunk is a nineteenth century science fiction genre where machines began to be powered by steam. I was inspired to build this creation after reading Jules Verne’s 20,000 Leagues Under the Sea. In his book, the Nautilus was a steampunk submarine that could dive to incredible depths. All of Jules Verne’s books were set in the age of steam power.
I built this creation because as long as I can remember, I have wanted to be a LEGO set designer. It has been my dream to move to Denmark and buy a tiny house and work for LEGO designing sets. Now I finally have the chance to design a real LEGO set!
I believe this will make a great LEGO set because it is very interactive and offers limitless play opportunities. From the spinning propellers and steam boat paddles to the firing cannons. Included is a removable display stand so it can go from a play set to a display set. I created a gear system so that when you hand spin the crows nest it spins the steamboat paddles and rear propellers simultaneously. With this set you are not locked into a character who’s story has already been told. You are free to create your own adventure!