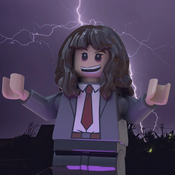 Inspired by the critically acclaimed Cartoon Network and HBO Max animated science fiction series Infinity Train comes a display piece style set that authentically captures the atmosphere and aesthetics of each season through the use of interchangeable interiors and a wide selection of minifigures and brick-built characters.
This design concept would make an excellent LEGO set as it appeals to builders with the variety of parts and colors it uses along with drawing in collectors due to the large amount of minifigures it includes. It also encourages the creation of original builds with the interchangeable interior feature. Furthermore, LEGO and Infinity Train are very similar brands as they both have very strong cross-generational appeal. Despite being created as a children's toy, LEGO has many adult fans due to both nostalgia and the complex engineering techniques found in many sets, to the point where several lines of collectibles have been introduced for an older demographic. Meanwhile, Infinity Train features colorful characters that appeal to children but also explores dark and complex themes without being excessively vulgar or violent.
The set consists of approximately 2,700 pieces and includes the following elements.
1 Complete nano-scale Train Car and 4 Interchangeable Interiors (1 from each season)
9 Minifigures
9 Brick-built Characters:
Brick-built Display base for Minifigures and some of the smaller Brick-built Characters
Parts to Connect Additional Train Cars as Illustrated Below (only one complete train car is included):