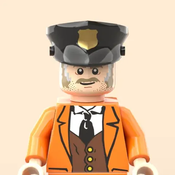 By SeenWoods
19 comments
Recreate some of the greatest moments in cinema history. All the fights and all the montages that are a staple in the Rocky films. The main build of the set is the boxing ring where you can recreate the fights between Rocky (Sylvester Stallone) and his many opponents including Apollo Creed (Carl Weathers), Ivan Drago (Dolph Lundgren) and Clubber Lang (Mr T). Alternatively, you can recreate the training montages, coached by Mickey (Burgess Meredith), where Rocky spars against the bag, runs up the Philadelphia staircase, catches the chicken or weight trains. This can be done in the interior of Mighty Mick's Boxing gym, that makes up a large majority of the components in the set. A T-bone steak piece is added as an accessory as a nod to the famous scene of Rocky sparing against the cow ribs in the freezer.
The set comes with two different Rocky Balboa minifigures, a fighting one dressed in his shorts and boxing gloves and a training montage version where he dons the grey jumpsuit. It also comes with Apollo Creed, Mickey, Clubber Lang and Drago. Rocky is equipped with the accessories needed to train for his fights, including a shoulder piece log accessory, his weight bar and a pair of dumbbells. Please support this set for a chance of it being created. I appreciate everyone who clicks support. If you've ever seen the movies, you would know this is a film series that deserves a LEGO set based off of it. Thank you!