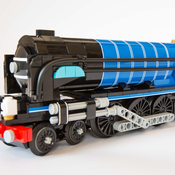 "In 1990 a group of people came together to share an extraordinary ambition – to construct a brand new Peppercorn A1 Pacific.  They formed The A1 Steam Locomotive Trust and after nineteen years of incredible effort that locomotive, No. 60163 Tornado, moved under its own power for the first time in 2008." - www.a1steam.com

I've always wanted another steam engine to partner the Emerald Night, and I thought the No. 60163 Tornado in British Railways blue colour was amazing, and the inspiration for my build. I've built using the ideas of the train, making changes where needed and for play, only using parts in use today. This has been play tested over many hundreds of hours with tweaks and modifications to make it run smoothly. There are some new and innovative ideas that hopefully produce a fun overall build.

I've added some 'stickers' to the main image using the computer. "60163" on the engine front and on both sides of the cab - this would become the LEGO set number, and the word "Tornado" over the turquoise plates.

Many thanks for your interest and support on this project! If it made it through to production, I'd love to be able to make a donation to the A1 Steam project.