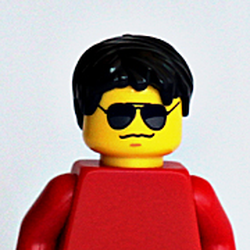 (not much to say about it but this would be perfect for a plane lover!)

if this was made into a set the series would be called *Planes* or some other weird or lame name i come up with.

Since I had no time to wright this I made it short for the people who just hate reading long paragraphs :P

Other planes for the series (predetor unmanned drone)

a better veiw for the stand and other small deatails.