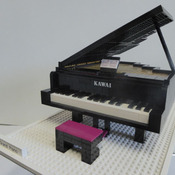 This beautiful Yamaha Grand Piano is much more than a LEGO build for us. It is story and symbol. It is music and life. It is hope and dream.

This beautiful Yamaha Grand Piano was built collaboratively by 21 year old Lauren Winbanks (diagnosed Intellectual Disability and Autism) and her mother, Dianne Winbanks (who had only built one LEGO construction prior to this build!). When Lauren was just 4, we were told to not expect anything of her. She was too low functioning to amount to anything. Not to be deterred, we have spent the years with a focus on what Lauren could do rather than what she couldn't do. Lauren is now doing Grade 5 piano and is immersed in LEGO building and exhibiting.

Lauren's strengths of music and love of LEGO come together in this build and stand strong and proud.

After exhibiting our Grand Piano at Victorian and South Australian exhibitions (including Brickvention 2015) thousands of fans of LEGO have encouraged us two builder rookies to list our Grand Piano on LEGO Ideas.

So after our Grand Piano:

1. Won the Best Small Model award at Inside the Brick LEGO Exhibition in South Australia and

2. One fan of LEGO returned to the South Australia exhibition twice to offer to buy it on the spot

we are taking the plunge and here it is.....our Grand Piano!

Lauren is an absolute success story....and just imagine if this Grand Piano was a LEGO Ideas set. WOW! Would that be a sight to behold. And no one would be more proud to stand beside her as equal partner than her mum and greatest fan.

Our Grand Piano would make an amazing set because:

We would be open to set design ideas. For example, at the moment there is a Yamaha Sticker in a different font to the usual font used by Yamaha. We now have had printed bricks made up using the Yamaha font (in two different colors - Gold and White. See photos for font idea but note that the photos are blue and green print for some unknown reason - They are actually gold and white so imagine that please. We settled ib Yamaha because Lauren plays on a Yamaha piano (sadly not a Grand Piano). However, there is no reason why the final set could not be another brand or even an invented one. Likewise we would be open to all ideas of how to improve the build even more. Maybe the touch of 'Friends' colors might be a design change?

We really love the shine of the black bricks. Everyone comments on the use of pearl gold grills to make the string effect look so awesome.

We would love you to support our collaborative LEGO Idea of the Grand Piano. Lauren and I would appreciate every single vote and share.