Just past 3000 supporters and I am thrilled to update this project with a build of Death and his trusty steed Binky.

This has been a long time coming, sorry for the delays. I should not take anywhere near as long to get to Granny but I want quite badly to represent the character with quality and with respect for the many Discworld fans that Love these characters so much.

Granny Weatherwax is the next and final character I intend to include with this project. As with all the previous characters I want to build a small vignette to go with the character...but I am having some difficulty nailing down how to present Granny. I know she will have You but things get sketchy after that.

If you (not You) have any ideas for a small Granny Weatherwax vignette please feel free to share them in the comments.

This is a campaign to make a Lego set based off of the Discworld. In order for that to happen, We need to get this project to 10,000 supporters. At Current levels of support, that day will not come for 3 years, possibly longer.

I know that fans are out there and in the numbers to get this to 10k. I would like to make clear that Supporting this project is not a declaration of intent to future purchase but a desire to see the concept reviewed by The Lego Group for production.

Registering and supporting only takes a few minutes, less if you use your Facebook or twitter account. Please make sure you register THEN support though. If you try to support without registering first, the vote does not count.

This is a campaign to produce an official Discworld Lego set. Producing fan conceived Lego sets is the point of Cuusoo. Projects really only have a shot at getting produced if they "go viral" to some extent. So please consider tweeting the project (and tweet again a few days later to pick up stragglers!), sharing on Facebook, directly contact esteemed individuals (like Sacharissa Cripslock) an webpages that are cool enough to talk about the Discworld, and send it up every Clack tower you can find. Even use one of Moist von Lipwig new fangled stamps....of course, a campaign to create such a Lego set would be so awesome and unpredictable that we really should avoid bringing it to the attention of the Auditors of Reality, so do your best to keep them from finding out.

IF you already know and love Discworld, you can jump down to the next image...otherwise keep reading for a description of what Discworld is....

Congratulations, you have now discovered Discworld! It is an ongoing series of books (and multimedia extravaganza!) by Sir Terry Pratchett and it is quite simply one of the greatest literary continuums off all time.

The setting of the series, (as the name implies) is disc that is balanced on four elephants which are, in turn, on the back of a giant turtle, the Great A'Tuin.

The books are inspired by our own history, literary classics of ALL breeds, mythology, and the ever confounding human condition. The stories, while rooted in the fantastic use wry wit and cunning satire to tell very compelling narratives while also reflect real world issues, without ever getting to heavy.

The Discworld has spawned no less than:

More detailed information about the credentials of the series can be found here.

A lot more details about the narrative and fiction of Discworld can be found here.

Quite frankly I suggest the books to anyone who enjoys...well, anything really. Any that goes double for those who DON'T like anything. 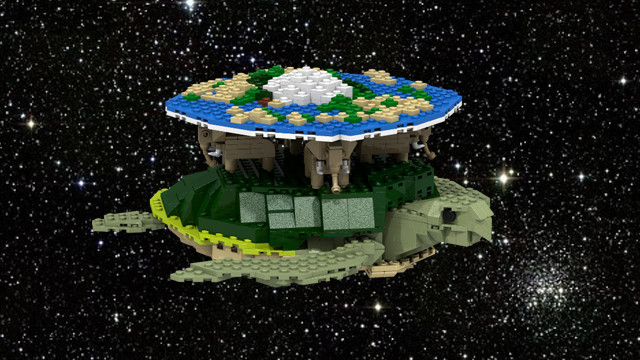 I decided to try to recreate some of Bergholt Stuttley Johnson's work but I kept running out of Octarine colored bricks and the little imp just kept refusing to make any pictures of it in order to preserve its own sanity.

Failing that I thought long and hard about how to best represent my love of the Discworld series in Lego form. I considered attempting to build various structures described, like the Unseen University or the Treacle Mine Road Watch House, in the series but found that each one was not significant enough to embrace the scope of the series...Rincewind, The City Watch, The Witches, the Wizards, Death, Tiffany Aching, Moist von Lipwig.

For a while I considered doing The Kite and its Crew. In the end though, Cuusoo will only produce one set for any project submitted. So I have decided to go with the Whole Thing. But I have added a micro build of the The Kite (see the next last picture).

In addition, I plan on creating a small collection of figures that, like the Discworld's elephants, form the foundation of nearly all the stories of the Disc:

In addition I will be including a personal favorite of mine, the Librarian. Excluding Death, I do believe he is in the most books...except perhaps C,M.O.T.D.

I considered adding Cut-Me-Own-Throat Dibbler but he was charging too much for his likeness, and his sausages make me sick.

Over the following weeks I will be adding my custom renderings of these figures to the project. I want to take my time and do them the justice they deserve. So check in from time to time for updates, or you can follow me on twitter, @glenbricker.

Many of you are likely aware that Terry Pratchett has early onset Alzheimer's. As of 2010, there are an estimated 35.6 million people with Alzheimer's worldwide and the number is expected to double every 20 years. As the creator of this Cuusoo project, if this reaches production I will receive a small portion of the profits from the sale of the resulting set. I will donate 50% of any profits I may receive from this project to Alzheimer's research. 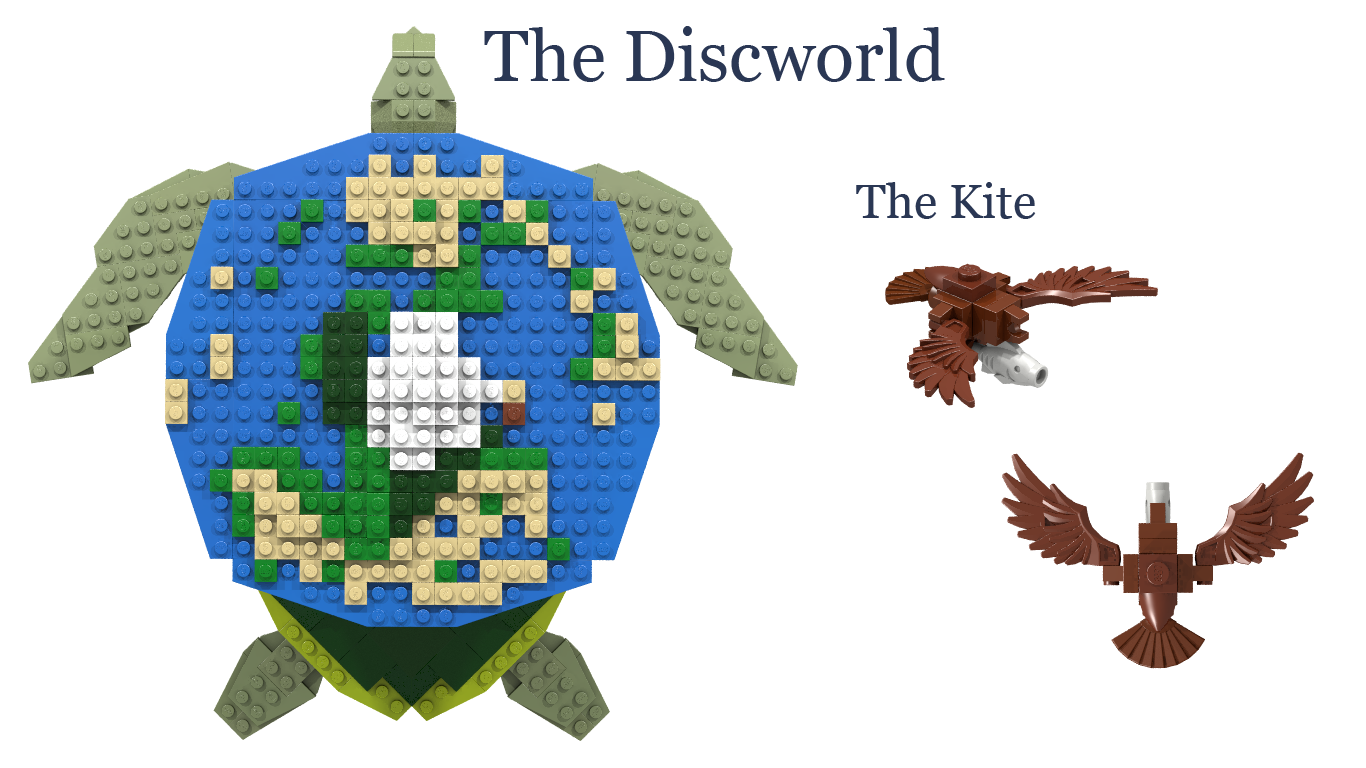 The Turtle shell and flipper are built 45 degrees off the standard, that is to say the disc and the, Turtle head are 45 degrees off from the body of the turtle. This allows the Elephants to be seated quite firmly even though they are odd angles.

The Disc and Elephants a place out with "Lego geometry" to get point of contact that match despite this odd orientation.

Alatariel tweeked my elephants design from "cool" to "awesome." I think she could only have made them better with bow ties and a fez.

If you like the elephants even a little bit I must recommend that you check out her projects: 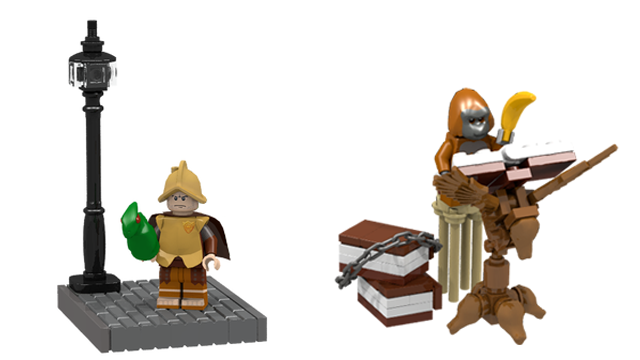 What you see above is the final proposal of the Librarian and Sam Vimes vignettes.

The Librarian image is based on a Paul Kidby image from The Last Hero. Click here to see a comparison picture (Cuusoo only lets me put 5 pictures up) Some of you may think the minifig looks agry...well sometimes the Librarian is angry. That is not the intent though. I will work on it a bit.

Sam Vimes is also based on a Paul Kidby image. Click here to see a comparison picture and the street light (shown in the top image) is based on those seen in the Discworld movie "Going Postal."

My plan is to release the figures as I get them designed. One at a time. I would rather show you these silhouettes now and let your imagination take over than show a sub-par printing. Regardless of the quality of my designs though, if this project reaches production, a TRUE Lego artist will design the final production figures, so you should judge the concept more on the quality you have come to expect out of Lego minifigs than anything I produce.

I have been toying with the idea of including a Terry Pratchett figure. If I could only have one figure I would probably go with Pratchett. I have also considered having Terry Pratchett instead of the Librarian.

One of the big things keeping me from doing it is that a Terry Pratchett figure is pretty easy to make. You just take Sean Connery's head and put it on Shia LaBeouf's body then add a Black fedora. That is not something I ever imagined saying before. You might want to swap out the pants for black ones though.

The other reason is I am not sure he would care for it. If he wants one though, he gets one, even if I have to make it myself.

I would love to include EVERY character from Discworld but Cuusoo projects still have to remain with the limits of reason to get produced. So, my selection here is based on the idea of providing a core character from every story branch of the Discworld continuum. I mean, I love the City Watch. If I could only have one set of characters I would go with them. Vimes, Carrot, Angua, Nobby, Fred, and a brick built Detrius...perhaps reminiscent of the Rock species Crash and I have in this project. But that would be unfair to fans of the Witches, the Wizards, and the Death novels...so this is my compromise and I think it is a solid one.


If you really really really want a sixth figure, then what we are going to have to do is get this project to 10,000 supporters as quickly as possible. It is no guarantee but the faster a project get to 10,000, the higher the proven demand is and likely the better chances that other character could be added. 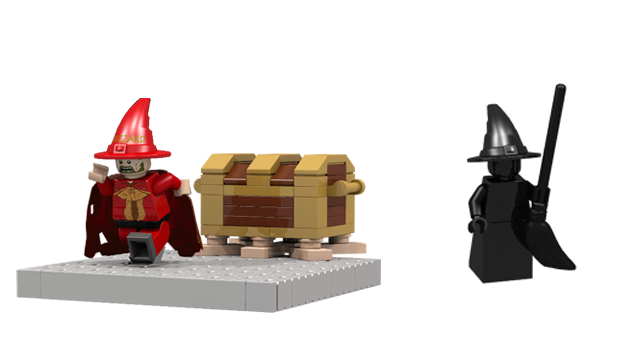 Above is Rincewind and his Luggage and a Silhouette of the planned future Granny Weatherwax figure that I am currently working on.

Please consider also reviewing these other worthy projects
From left to right, then row by row:

And here is a list of Other great projects if you are so inclined to be curious.

These are additional fantastic projects all with at least 200 supporters so you know they are of high quality.