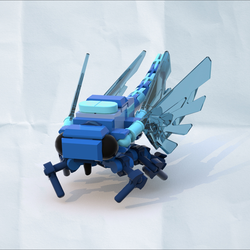 Most of us grew up in simpler times. Less technology and more playing around in the garden. Even now, with all the screens around, most kids still enjoy getting away from the city and playing with bugs and insects in an open area.

Call it nostalgia, but insects remind me of a younger self, and I thought about recreating these backyard buddies in LEGO.

Main goal was to make them small and yet articulated, posable. Tried to keep a true scale among them, so the bumblebee is smaller than the dragonfly, etc. Tried to keep them as realist as possible.

Each insect is small in size and quantity of bricks so they could either be presented individually or as a set.

All images are in high quality (2560x1440) and have been rendered using Bluerender.