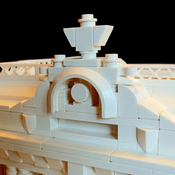 "Europe has its cathedrals, and we have Grand Central" the American architect, Philip Johnson, once proclaimed about the building that today, more than ever, is the heart of New York City.

Described as a "poem in stone" this grand, Beaux-Arts style masterpiece known as Grand Central Terminal opened in 1913.  More than a stop in the daily commute, Grand Central is a destination in and of itself with more than 750,000 people passing through each day.  Commuters mingle with tourists to catch a train, browse shops, dine, and gaze in awe at the sheer magnitude of the station.

The interior of this set is modeled to capture light through windows and skylights in much the same way as the actual building.  By leaving the center portion of the roof open, you can watch as the light shifts through the main concourse throughout the day, illuminating windows and casting shadows.  The interior highlights the simplicity and flow of the building including the ticket booths and the grand stairways at each end of the Main Concourse.

The exterior of the building features classical Corinthian columns, soaring arched windows, and statue of the Winged Mercury above the main entrance of the station.  In the center arch stands a statue of railroad magnate, Cornelius Vanderbilt, patriarch of the family who built the Station.  Perched on the corners of the building are eagle statues that were salvaged from the train station that occupied this lot before the construction of the building that stands today.

Similar to other large-scale Lego sets of world-famous landmarks (Big Ben, Tower Bridge, and Sydney Opera House), this set has a higher level of detail than the smaller Lego Architecture series sets, yet is still sized to fit on a single 48x48 base.  Because specific bricks were not available in the colors I desired, I constructed my model from white and transparent bricks.  However, if made into an actual Lego set, specific colors can be chosen to reflect actual materials (tan for the limestone exterior, green for the copper roof, red for the fabric awnings that adorn the shop windows).

As a child, I was inspired by Legos to create and build, eventually leading me to a career in architecture.  I thank you for your support in making a childhood dream come true of sharing my own Lego creation with the world.