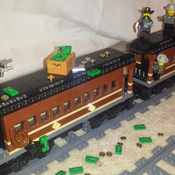 For your consideration is a miniature (16x32 stud) modular post office.  As clearly evident, this building is significantly smaller than yearly Lego modular models; however, it is equally detailed and 100% compatible with Lego modular specifications.  The general idea behind this modular building is that Lego could release 1-2x smaller/"custom" sets between usual yearly modular sets.

What Exactly Makes It "Custom"...?

Whenever I get a new modular building (or almost any Lego set for that matter), after I build it, I immediately begin tinkering with it to customize it and make it my own.  What I believe makes it "custom" is that the roof is (essentially) blank in the out-of-the-box set.  This allows very custom integration into everybody's Lego cities.  Some will choose to simply build some AC units to place on the roof.  Others will choose to expand previously owned modular buildings to occupy the under-utilized real estate.  I, for example, chose to add plenty of windows and a patio door to the apartment above the neighboring Pet Shop. Then using minimal additional pieces, built a hot tub and set up some patio furniture for a roof party.  The advantage here is twofold; one - the set contains less pieces so it can sell for less and; two - allows for very different and creative uses for previously owned Lego pieces.

The design is based on the neighboring Pet Shop Lego set.  The lettering reading "POST" utilizes the same technique as the Pet Shop.  In addition, the overall facade of the building is designed to mimic the Pet Shop and stand next to it.  The outside features two mailboxes with different colors indicating different mail services.  The interior houses a cramped light blue and gray counter, cluttered with mail and parcels and a scale weighing a letter.  Stone gray mailboxes and lockers stand opposite of a brown counter with a pen and an additional letter and parcel.  Above this counter are two maps and a wanted poster.  Two shelves hang behind the main counter and offer customers various small 1x1 items.  Centered above the back door is a clock.

As mentioned above, the roof party isn't technically part of the set I am suggesting.  The roof party I've designed extends from the Pet Shop next door.  Attempting to follow design guidelines set by the Pet Shop's facades, I built additional windows on the side and a patio door which allowed me to transform the Post Office roof into a balcony/deck.  I built a custom hot tub, slapped together some lawn furniture, and recycled the grill from a previously purchased Lego set.

Being a huge fan of the Lego modular building series, it's become something of a passion to collect the yearly sets, build my own custom additions, and tinker with minute details almost nobody but I will ever notice.  Shortly after purchasing my first modular building - the Fire Brigade - I began to tinker with my massive childhood collection in attempts to construct my own modular building.  I began construction on a grand train station which occupies a 32x32 plate with a covered platform which extends behind it on another 32x32 plate.  As weeks passed, I found a certain calmness and joy in the daunting task of building complex facades.  After a few months of tinkering, I moved on to arranging the upstairs Medieval -themed bar and attempting to arrange the ticket counter downstairs.  Years have since passed and my modular collection has expanding to over a dozen buildings, but the train station is still not "complete."  Though it stands in my Lego city, parts of the interior are still not quite perfect.  Instead, to distract myself, I began working on a series of side projects and the first to be completed is this custom modular post office.