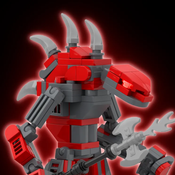 By ToaOfPlastic
18 comments
Toa Lewa has been infected by the dark influence of Makuta! Can his brother Toa Onua save him from the evil one's control or will Lewa remain a slave to the darkness forever?
This set is based on the iconic "Lewa VS Onua" fight scene from the Mata Nui Online Game. The first character against character fight ever to be shown in an official piece of LEGO media!
Each figure is built from modern system pieces, and has a rubber band powered function allowing them to attack. (rubber bands are only shown in some images as they couldn't be rendered in my digital building software, and had to be drawn in manually.)
Lewa's infected and standard masks are both included, and can be swapped out.
I created this project because I'd love to see LEGO release buildable action figures again, especially now that the standard LEGO system has evolved to the point that such things can now be built without relying too much on large specialized parts.