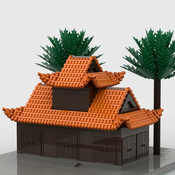 1. What it is:
My model is an ancient village gate. Village gates are traditional architecture often found in old villages. An old culture has faded from time to time. Many works are damaged over time and cannot be restored. Some are damaged by nature, some are caused by humans. The surviving works have been put into conservation to keep the ancient vestiges.
2. Why I built it:
I wanted to recreate the ancient culture with bricks. This is another approach to introduce traditional culture to many people, especially young people.
3. Why I believe it would make a great LEGO set:
Because the model has ancient and unique features. It's quite simple, many people can assemble it. If you put it on your desk it will add a little interest.
This model includes:
Square base 16x16.
Four square pillars below support the base.
Four square pillars above support the roof.
The roof with the two-dragon moon is at the top.
The two characters include a male and a female.
If you are interested in this model please support my project. You can also leave your comments about it. Thanks.