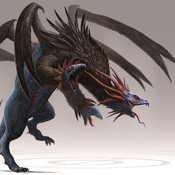 Hello there, and thank you for checking out this project. I have been a huge fan of Tengen Toppa Gurren Lagann for a while, and decided to recreate the iconic gunmen in Lego form. With your support, this project can grow to greater heights and potenially become an official Lego set. Let's make the impossible possible!

This project is a minifigure scale model of Gurren Lagann. It is fully posable and can stand on its own without external supports. The mechs of Gurren and Lagann are separate builds, but Gurren can transform into Gurren Lagann with some aditional assemblies. Please note that the head of Gurren Lagann is NOT the posable Lagann, but a separate assembly that combines head and helmet. Building a helmet to fit over Lagann was not possible to do accurately at this scale.

Both mechs have enough space to fit a pilot minifigure, and can wield their signature drill weapons. They have been designed to match their depictions in the show as close as possible, while also remaining strong and able to transform. The transformation process consists of:

For figures, I have included Leeron, Kamina, Simon, and Yoko. The figures shown the images are placeholders that would require new printing and colours in a set. Kamina could also wear a cape similar to the ones worn by Dr. Strange minifigures, and Leeron could have one of his small robots as an accessory. Included is a small stand for the minifigures, resembling the barren wasteland from the beginning of the show.

Mechs have always been a hot topic for Lego, and I believe this project would be no exception. The posing and transforming functions make for great toys. With a bit of adjustments I am sure that even more play features can be implemented, such as stud shooters with drills in hollow studs for ammo. I have also included attachment points on the back so that the wings could be attached.

On top of all that, it makes for a great display peice. From my own personal experience with friends and conventions, anyone who has seen the anime freaks out with excitement when they get a glimpse of this model.

Like what you see? If you would like to support this project, then please click the support button on the right side of your screen. With a Lego Ideas account, it should only take a few clicks and a few seconds of your time. Feel free to spread the word on social media, and tell your friends. In order to get in the running to become an official set a project needs 10,000 votes, so every supporter counts!

Thank you once again for taking the time to look at this project. Any support you can give is greatly appreciated.