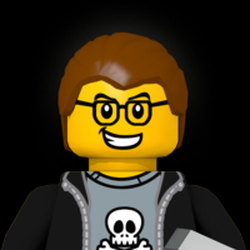 I would like to introduce you my new creation: The "Traum-Express“ railway wagon from the puppet show "Hallo Spencer“.

This show was produced between 1979 and 2001, and Spencer with his 11 friends were living in a round-village in partially very special houses.

We are very big fans of the show that had its 40 anniversary last year and so it's no wonder that I decided to build the whole round-village in minifigure size! There are so many funny stories told with very lovely characters in this puppet show that I think it would be nice to play with those sets in LEGO.

And now it is done: The first model is finished! The house of Spencer`s assistant Elvis and his wife Lulu. The wonderful railway wagon called Traum-Express!

I studied several episodes to build it as detailed as possible. With the background that it is a discarded wagon with 4 compartments, I built it 8-wide because it is more a house than a wagon to drive with a train on the railway (although this is possible!).

-3: bath compartment with sink and toilet

The minifigures of Elvis and Lulu are not completed yet but I will do an update if this is done!

I hope you enjoy this, be creative and have a good time!