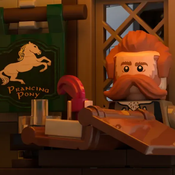 Story
The Ironbeard dwarfs are a strong clan and make their living as incredible blacksmiths and by digging for ore. This clan is led by Gromli Silverbeard who is the oldest and wisest. This family of dwarfs has ventured far from the home mountain of their relatives but have built a profitable mining outpost and established a wealthy trade alliance with Prince Zebulun of Lion Kingdom. Recently the Ironbeard clan has purchased a map to a large vein of Mithril ore within a few miles of their outpost. Mithril is the strongest and most valuable metal to a blacksmith. Unbeknownst to the family, a patrol of orcs has stumbled upon their home in the rock and are snooping around looking for trouble and valuables. They are led by an orcish thief named Ripfang, a sworn enemy of the dwarfs.

Inspiration
My children are my inspiration for my Lego builds. The dwarfs are some of our favorite castle minifigures and there are not many sets featuring them. This build is intended to feature the dwarven race and their unique home set robustly within the natural elements. My inspiration also comes from the many medieval fantasy stories I have read and seen over the years. I am also inspired by the great medieval Lord of the Rings Lego theme.

Play functions and the idea
The dwarf home is built into the rock and there is a secret entrance on the side of the hill and another trapdoor at the top. There is a back door built into a tree which provides additional camouflage for the back of the dwarf home and cover for archers. The home has a large forge for weapons and cooking, bunk beds for sleeping, and plenty of treasure to go around. The best feature for play is the ability to open the entire home down the middle on a hinge making all the internal components easily accessible. The roof is modular to allow access to the bunk beds in the room at the top of the home. I tried to feature rock, tree and plant techniques to really make the home look like it was dug and carved into the earth with a lot of stonework while still having a portion above ground which still has a medieval dwarf tavern style.

The set contains 5 dwarfs including Gromli Silverbeard, 3 orcs including Ripfang, and plenty of weapons from the forge. Hope you enjoy it!