Odym: The Homeworld of the Blue Lantern Corps

In this New year, I want to thank all the supporters who like my project.

Thank you again to all the supporters !

I am very pleased for all of your comments !

A new lego project about dimensions !!

I have made a new lego project, not about the lanterns, but about the Dimensions !!

Please look to this project and support (it's free) if you like it :

Hi everybody ! I have submited a new project about the Central Power Batteries! If you have time, please, go to see it. And if you like it, you can support the new project, it takes just a few minutes. Thank you ! 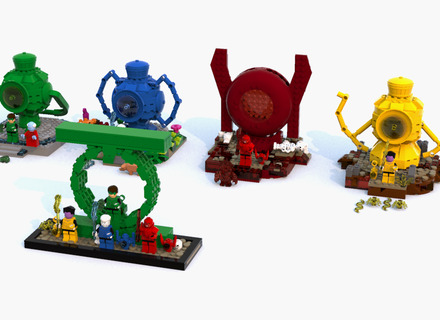 The story of the Blue Lanterns

After a comment, I thought that it will be great if I say the story of the Blue Lantern Corps. I have also created a scenario of this set.

On DC Comics there was the Green Lantern corps, the most famous lanterns on the universe and they were one of the 9 Lantern corps . They are leaded by the Gardians of the Universe, but when some other Lantern corps appeared (the Red, Orange, and Yellow lanterns), the Universe was transformed into chaos.

Infortunately the real danger will come, annonced by the Blackest Night prophecy in the Book of Oa, and it is comming to pass. But on the prophecy, it also says: "Elsewhere, a flicker of hope will shine from deep space, like a lighthouse warning the ships away from the rocks. The blue light will hold the line in spirit if not in strength".

At the end of the war with the Yellow Lantern Corps, Ganthet and Sayd, after being exiled from the Guardians of the Universe for their individuality, started the Blue Lantern Corps by creating a Blue Power Ring and the Blue Central Power Battery on a beautiful planet, Odym, who anybody knows the existence.

Created to bring hope to the future in the light of so much destruction, the Blue Lantern Power Rings are powered by the emotion of Hope. Their powers, similar to those of other organizations based around the emotional spectrum, are fueled by the emotion of hope. A blue ring can recharge a depleted green ring, and supercharge a full one. The first Blue Lantern was Saint Walker.

Who do you think will win? It is your turn to continue the story...

I just want to say thank you for the first supporters and, please, show the project to your friends. I know that we are far of 10 000 but if there is a lot of supporters, the set can be a real lego set.

By Rayman and cie
83 comments