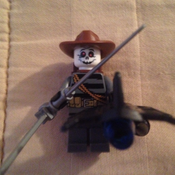 As a big fan Spider-Man and LEGO fan this was a highly anticipated set for me. There have been many Spider-Man sets released with some famous characters still not being made into minifigures and not many anti-vehicle play sets, which is why I feel this is a set many fans can look forward to. The sewer build has many fun play features that interact great with the minifigures.

>Attach a web to the wall and pull it down to reveal a secret passageway!

>Push the axel to send a hero flying and takedown Hydro-Man!

>Adjust and shoot the spring-loaded missile to knock out one of the heroes!

>Attack a hero by launching the Lizard from his 360 spinning catapult!

>Minifigures with accessories include: Agent Venom, Spider-Man with a web string piece, Squirrel-Girl with a blaster, Hydro-Man with two transparent blue pieces, the Lizard with his serum, and a crocodile!