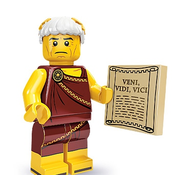 Minas Tirith, city of kings.
With the Amazon Lord of the Rings series now officially airing in september 2022, this is the opportune moment to vote for this LEGO Minas Tirith set. Let's show LEGO that we are dying to see the Lord of the Rings theme return!
This design is a play and display set of one of the most iconic fictional castles. The set is based on Peter Jackson's interpretation of the white city from Tolkien's Lord of the Rings. The battle for Minas Tirith, featured in the movie "The Return of the King", is one of the most memorable cinamatic battles ever. The LEGO Lord of the Rings theme misses just this one set to live up to the epic legacy of the Lord of the Rings franchise.
This set features three levels of walls, which are characteristic for Minas Tirith's appearance. The lower and upper wall are on minifigure scale. They feature working gates and walkable ramparts: perfectly playable to relive your version of the battle of Minas Tirith. The lower section of the citadel tower features a throne room. The citadel tower can be easily detached from the upper wall section, to enhance playability. Once finished playing for a while, the set can be reassembled to put it on for display. The citadel tower and the upper wall are both designed to bear resemblance to the actual grand scale of Minas Tirth. Therefore little houses, towers and royal buildings are worked into the design of the castle to fluently incorporate both minifigure and micro scale in the castle's appearence. The set also features several minifigures, working catapults on the walls, and a catapult for the orc army laying siege to the castle.
All together this sets includes:
Several LEGO Minas Tirith ideas have been put forward now. LEGO has a history of listening to its customers, so the only way to make this happen is to keep telling LEGO what we like. Please help me realising this set by supporting this LEGO idea! Also, let me know what you think about it and do not bother to ask for more information or pictures in the comments below. Thank you :)