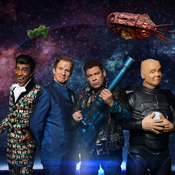 This is an SOS distress call from the Mining Ship Red Dwarf; requesting Support!

3 million years from Earth, the Mining Ship Red Dwarf. The crew are dead, killed by a radiation leak. The only survivors were; Dave Lister who was in suspended animation during the disaster, and his pregnant cat who was safely sealed in the hull. Its crew, including Arnold Rimmer, a hologram of Lister's dead bunk mate and a creature who evolved from the ships cat. Also joining them is Kryten, a series 4,000 Mechanoid recruited from the ship Nova 5, Holly, the Ships Computer, two devilish caretaker robots called the Scutters and a ridiculously annoying Talkie Toaster.

My set includes all 8 of these classic characters from the 1980's - 90's TV series Red Dwarf. Based on the Living Quarters of Dave Lister and Arnold J Rimmer BSC SSC, it features 4 distinct functions that make it as it was back in the day. These are a cog operated sliding door, a rotating sink, a removable table for easier playability and glow in the dark studs through the window that when shone on, glow to reveal an effect that acts like looking into space!

I have scaled down these Living Quarters also adding in my own design, using over 700 bricks to achieve this models Lego compatibility. I hope that all you Red Dwarf fans out there enjoy what I have produced. And happy building to all!