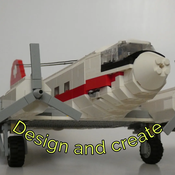 By Design and create
7 comments

Since its launch in 1956, the Cessna 172 is still produced and remains the most rugged and incredible aircraft on the planet. The aircraft has been produced more than 43,000 times worldwide and can reach a speed of 226 km / h. With its past stories, the Cessna 172 has forever marked the history of light aviation.

I think  that its simplicity of realization in lego will be able to allow everybody to recreate this emblematic plane, which is composed of about 500 pieces and whose interior is detailed,

I hope you enjoy this plane

Thank you for your contribution !!

By Design and create
7 comments