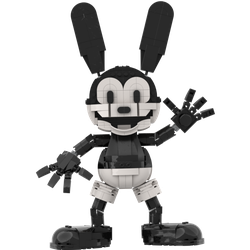 This is a model of the Calamity Ganon battle in the legend of Zelda: Breath of the Wild.
Breath of the Wild is one of the most popular video games of all time (than again, so are all of the Zelda video games).
I chose to build this iconic scene because I knew that I wanted a build from Breath of the Wild, which is such a big game, with so many locations and characters that it would be hard to get a feeling of the game with a single model. I immediately thought of a build of a Stable, Shrine or Sheikah tower, but the first one is already taken. Then I thought of the battle with Calamity Ganon. That was a perfect idea because it was the only way that I could get Link, Zelda, and Ganon in one build, and anyone who has completed the game will recognize this, no matter what path they have taken through the game.
The build itself contains a brick-built Calamity Ganon with a display stand so you can put him on the wall like in the game and shoot things, and minifigures of Link with Master Sword,  Zelda in her normal clothes with Sheikah Slate, and Zelda in the white dress that she wears during the ending of the fight with Ganon.
The model of Ganon is highly poseable, with the glowing blue claws,
big flame sword, Guardian-like blaster, and glowing blue spear. The bionicle head was a perfect fit. The only reference I had for this was a screenshot of when Ganon challenges Link, after breaking out of the cocoon-like thing.
This Build is the perfect size for a desk or shelf, and if you like this idea, please support it!
13