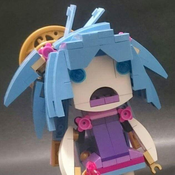 This car is one of those super-luxurious car that you probably haven't heard of. It's not mass-produce in manufacturing assembly line, but instead crafted solely by hands of brilliant engineers. Almost all the parts in this car are made by Koenigsegg themselves; it means from the Chassis to the wheels up to the engine, they design it, tested it, produce it and then assemble it.

Why did built it?

It's a Koenigsegg, so I should built it. Nah....  seriously, I want to be a bit unique.  Other Lego enthusiast built Ferrari, or Lamborghini, Mercedes, etc., so why not try something, not so famous, but still elegant-looking, hyper-exotic, super expensive, and only-in-my-dreams car?  and so I did.

This would be the second edition of this built. The first version, is, not so, good. So let's skip it.Let's move forward to the the second version then....

This is a 6-month long built, from the chassis, to the engine, the doors, yeah the doors that had to turn 90 degrees, the hood, the seats, the roof, up to the tools, which is not in a box, so  can't call it a tool box.

It all started with the proper scaling; The wheels were used as the baseline, yeah I super-love the wheels and Lego is not producing it anymore, and then the whole length of the chassis was next, then the height to the roof, and finally, the curves.

The whole outer shape of the body was done first and then the interiors. The dashboard is quite small, but luckily the wiper is there to give the illusion of the windshield.

Among the parts, the engine is the most intricate. I am not sure how many times I had to redo it, because the details should be there, and at the same time the hood must close down perfectly. And must remain on the correct scale and it should be able to show the inside of the engine from the small hole as well. . I will show the entire engine one of these days, so don't worry.

The intake to the radiator starts from the side of the doors, so if you will look closer, the grills are exposed on the small opening at the side of the body. The doors snug on it perfectly without obstructions.

The doors have some technique parts on it, the 'T' pipe is the key here, as well as the robot arm which serves as the lever. I tried to be as accurate as possible, that's why one door have 20+ parts at least. That doesn't include the arm thou. So my guess-estimate quantity of this car is around... 1300, give or take 100,

The interior is a two-tone Tan and dark-tan, Dark brown and pearl gold are used as highlights,. The blue circle on the dashboard is a Lego, really.

The last section that was built is the tool box on the compartment. Ok, its not a tool box, but it still has tools, which is covered by the small platform.

I almost forgot, the front wheels are actually steering, although it's not actually connected to the steering wheel but it can turn a few degrees thou. The assembly for the steering arm is composed of 20+ technique parts. I need to sacrifice one stud for it really, If I didn't, the front truck can fit in one spare tire. hmm... maybe I will do it on my latest update.

I hope I did capture the details of this car, I was happy when I was planning it, during the assembly, until the photo-taking session, and how I wish others will be able to built this as well, and that's the reason why I'm submitting this to Lego.

Maybe I will create a book about it in the future, so I can share the passion and the fun to others as well.

Well, that's it. Thanks a lot for reading and thanks in advance for your vote! Let's make this a reality!