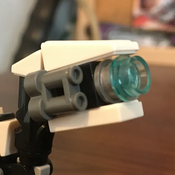 By Moon man
10 comments
Half robot half crocodile bounty hunter, with a super powerful robot suit equipped with a laser cannon on  his left shoulder, and on his right shoulder a transmission jammer, and very powerful claws.
I was building a bunch of space stuff when I made this. I originally built it for fun and then decided to submit it as an idea because I think it would make a really cool lego set.. I believe it will make a great Lego set because cyborgs are awesome and people like space and sci-fi stuff, and people could come up with fun stories and space scenarios to put this guy in.