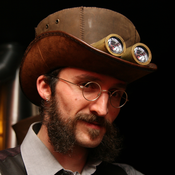 I grew up with games like "Hero Quest" and "Dungeons & Dragons" and always wanted to combine the concept of these games with the endless possibilities of the LEGO bricks. Since the use of normal Minifigures needs quite a lot of bricks and space for "normal-sized" rooms, I decided to use the Microfigures instead that LEGO used for many of its' boardgames.

One player will take the roll of the dungeon's monster-commanding "Overlord" (this player is also the only one who knows the board's layout). The other players choose their heroes, explore the dungeon, fight monsters, gain new equipment and abilities (new spells etc.) and try to reach the current floor's goal - most of the time this is done by defeating a special boss-monster, finding a certain artefact or simply reaching the level's "exit door" (wich mostly requires the heroes to find a special key first to unlock it).

The board itself consists of various modular corridors and rooms that are exchangeable and will be placed as the heroes advance on their journey and explore the layout of the current dungeon.

Since the possibilities of this game are endless it would probably be a cool thing to release a starter-set with enough contents for the first adventures and expand it by releasing additional expansions in the form of new heroes (with new abilities and equipment), new monsters and new environment.

I've already played it countless times with various people, since I already finished it in the beginning of 2013, and they all loved it!

To those who are not so familiar with RPG games:
Think of it as a more advanced, "grown-up" version of LEGO's "Heroica" with more advanced rules and a bigger focus on the roleplaying-part...