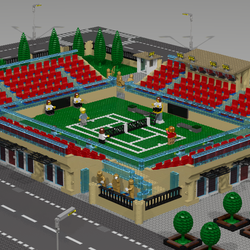 I would like to present to the Lego Ideas Community the fourth project of my "Great Moments in History" series:

Between 1271 and 1295 (i.e., during 24 years), Marco Polo accompanied his father, Niccolò Polo, and uncle, Maffeo Polo, on a trip that would lead them to Beijing and to the Court of Kublai Khan, the mongol ruler and founder of the Yuan dinasty. Nicollò and Maffeo had already been at the presence of Kublai Khan in 1266 to whom they had promised, among other things, to carry a letter to the Pope in Rome and to bring back oil of the lamp from Jerusalem. Therefore, in 1271, at the age of 17, Marco embarked on his father and uncle's quest to fulfill Kublai Khan's wishes. They sailed to Acre, rode camels to Hormuz and followed the Silk Road. They arrived at the Summer Palace of Kublai Khan in Shangdu (near Beijing) circa 1275.

PS - You can find the first three projects of this series:

Great Moments in History: 1776 - The Declaration of Independence of the United States;

Great Moments in History: 1494 - The Signing of the Treaty of Tordesillas

Great Moments in History: 936-1558 - The Coronation of German Kings at Charlemagne's Throne (in Aachen)

at these links (respectively):